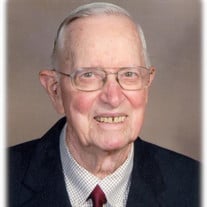 William 'Bill' C. Leingang, 87 years, of Columbia, IL, passed away on December 2, 2020 at Oak Hill Care Center, Waterloo, IL. He was born August 26, 1933, in Columbia, IL, son of the late William A., and Mary E., nee Toenjes, Leingang. He was married to Mary E., nee Klein, Leingang, who survives him. They were married July 1, 1959, in Freeburg, IL. Bill had retired from the Federal Aviation Administration where he had worked as a supervisor. He was an active member of Immaculate Conception Parish, where he had served as a past school board member, 30+ year member of the men's choir, and had served the Knights of Columbus-Council 6165 as a treasurer. He had also been a member of American Legion Post 581. Bill's family was always his passion and priority, and he never missed any of the grandkids' sporting events as he was their greatest fan. He was an avid gardener and sold vegetables from the family farm for many years. Bill loved all things farming; tractors; barns; and auctions. Also, surviving are his three sons, William (Theresa) Leingang of St. Louis, MO, Robert (Rosemary) Leingang of Columbia, IL, and James (Andrea) Leingang of Chesterfield, MO; daughter, Maria Leingang of Corpus Christi, TX; grandchildren, Elizabeth, Catherine, William B., Andrew, Nathanial, Alexandra, Sabrina, Noah, and Owen Leingang; sisters, Rita Hill of Freeburg, IL, Marian (Reynold) Ledbetter of Columbia, IL, and Germaine (William) Schlueter of Webster Groves, MO; brother, Paul (Jane) Leingang of Evansville, IN, along with other relatives and friends. He was also preceded in death by his brothers-in-law, Harry Hill, and John Klein. Visitation will be Tuesday, December 8, 2020, 10:00 am - 12:00 pm, at Immaculate Conception Catholic Church, Columbia, IL. A funeral Mass will follow the visitation at 12 noon, with Fr. Carl Scherrer officiating. Interment will follow in the Immaculate Conception Cemetery, Columbia, IL. In lieu of customary remembrances, the family requests with gratitude that memorial contributions be directed to: Eugene Schorb - Immaculate Conception School Education Fund, 411 Palmer Road, Columbia, IL, 62236. For more information, please access our website, www.leesmanfuneralhome.com. Lawlor Funeral Home, Columbia, IL, handled arrangements.

The family of William C. Leingang created this Life Tributes page to make it easy to share your memories.

Send flowers to the Leingang family.