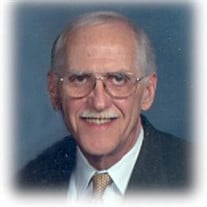 Mr. Ronald W. Wallace, 87, of Columbia, Illinois, formerly of Belleville, Illinois, passed away on Monday, February 21st, 2022 at Memorial Hospital East in Shiloh, Illinois. Mr. Wallace, son of the late Floyd and Gertrude (Myers) Wallace, was born on July 2nd, 1934 in East St. Louis, Illinois. In addition to his parents, Mr. Wallace was preceded in death by his brother, Floyd Wallace, along with other relatives and friends. Mr. Wallace is survived by his wife, Margaret (Carle) Wallace, who he married on August 23rd, 1958 at Immaculate Conception Church in Columbia, Illinois, his children; Steven (Joan) Wallace, Rita Wallace, and Elizabeth (Robert) Lukomski, and his grandchildren; Michael (Jess) Binetsch, Jennifer (Cole) Lati, and Faith Lukomski. Mr. Wallace is also survived by a sister-in-law, Linda Wallace, and a brother-in-law, Arthur Carle, along with many nieces, nephews, cousins, and other relatives. He will also be missed like nobody’s business by Stella Capella, a precocious but precious long-haired Chihuahua. Mr. Wallace was a 1958 graduate of Illinois College in Jacksonville, Illinois and was awarded an honorary Doctorate of Humane Letters from Illinois College in 2006 in appreciation for his many years of dedicated service as a member of the college’s Board of Trustees. After graduating from college, Mr. Wallace served in the United States Navy aboard the USS Shenandoah which was stationed in Norfolk, Virginia. After being honorably discharged from naval service, Mr. Wallace worked at the Farmers State Bank and Trust in Jacksonville, Illinois. In 1962, Mr. Wallace joined the Federal Reserve Bank of St. Louis as a bank examiner. In 1966, he joined Union Bank of Illinois, formerly known as Union National Bank of East St. Louis. He was named President of the bank in 1971. Ron’s career with Union Bank, and its holding company, Union Illinois Company, spanned over 30 years during which time he served on the board of directors for Union, State Bank of Jerseyville, Illinois and Columbia National Bank, for which he was a founding director. In 2006, Mr. Wallace was called out of retirement to serve as interim President of the State Bank of Red Bud. Mr. Wallace devoted countless hours to charitable organizations. As mentioned previously, he was a proud member of the Board of Trustees at Illinois College in Jacksonville, Illinois. He served on the boards of numerous organizations and regional banking groups. Ron served Blessed Sacrament Parish in Belleville, Illinois as a parish trustee and member of the school board. In addition, he was on the financial advisory board at Althoff Catholic High School, the financial advisory board for the Diocese of Belleville, Illinois and served on numerous boards for the Shrine of Our Lady of the Snows, including their former radio station, WMRY. Mr. Wallace was a founding member of Target 2000 which sought to provide low interest loans to minorities. Ron was awarded the Kimmel Award from SIU Edwardsville for his outstanding achievements in community leadership and involvement. Mr. Wallace was a member of Immaculate Conception Catholic Church in Columbia, Illinois and a funeral mass will be held Saturday, March 5th, 2022. Visitation will be held from 10:00am - 11:00am with the funeral mass beginning at 11:00am. A private inurnment will be held at Jefferson Barracks National Cemetery, St. Louis, MO at a later date. As an expression of sympathy, the family prefers memorial contributions to the Eugene J. Schorb - Immaculate Conception School Fund for Catholic Education, 411 Palmer Road, Columbia, Illinois. For more information, please access our website, www.leesmanfuneralhome.com. Arrangements were handled by Leesman Funeral Home.

The family of Ronald W Wallace created this Life Tributes page to make it easy to share your memories.

Send flowers to the Wallace family.