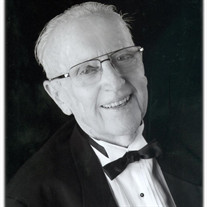 Roland H. Gantt, 96 years, of Columbia, IL, passed away on October 6, 2020 at his residence in Columbia, IL. He was born July 5, 1924, in Spokane, WA. He was married to Dixie Lee, nee Curtis, Gantt, who survives him. They were married in Columbia, IL on January 19, 2003. Roland was born in 1924 in Washington State, and moved to Southern California at an early age. He graduated from Antelope Valley High near Palmdale and Lancaster, just North of Los Angeles in 1942. Shortly thereafter, he enlisted in the US Army and was sent to the Pacific Theater. He was the leader of a group of gunners that were assigned to protect an Indonesian merchant vessel from the Japanese through an agreement between the US and Indonesian governments. While performing these duties, the ship was torpedoed and Roland and many of the crew spent 21 days adrift before being rescued. After the war, Roland pursued a handful of jobs before forming his own trucking company specializing in hauling houses across the country. This trucking experience led him to a job with a fledgling company - UPS, first as a driver, then a supervisor, and then as a driving instructor. Soon, he was assigned the job of traveling the country and opening new branches of the expanding company. He retired in the late 90’s but remained plugged in to UPS for the rest of his life. Roland loved to watch movies, go out to eat, and attend fundraisers and other events. One of his greatest passions was travel, and he journeyed extensively to all inhabited continents, seeing the sites, and diving into the history and cultures. He remained very faithful to his country and the military and was honored with a trip on the Honor flight where he visited the World War II Memorial in Washington DC with former Vice President and Senator Bob Dole. Roland loved to always say “Never waste a day”. In over 96 years he didn’t waste very many of them. Also surviving are his daughters, Kelly Meaux of Palm Desert, CA, Kim (David Miles) Wood of San Diego, CA, Merri (Bob Lugo) Harding of San Diego, CA, and Lori (Skip) Weber of Columbia, IL; grandchildren, Christopher Meaux, Ryan Wood, Brittany (Casey) Angst, George Weber V, and Jordan Weber; great-grandchildren, Penny and Harvey; sister, Loydell (David) Johansing of Placerville, CA; nieces, Sara (Tony) Soto of Torrence, CA, and Rayona Geyer of Redding, CA; along with other relatives and friends. He was preceded in death by his parents, Roland and Hope, nee Raymond, Gantt, along with 2 brothers, Raymond Lee Gantt, and William James Gantt. Visitation will be Saturday, October 10, 2020, 1:00 pm - 2:30 pm at The Falls Reception and Conference Center, 300 Admiral Weinel Blvd., Columbia, IL. Funeral services will follow the visitation at 2:45 pm, with Pastor Ron Sweet officiating. A luncheon will immediately follow services. Entombment will take place in the Forest Lawn Cemetery, Cathedral City, CA on Saturday, October 17, 2020, 3:00 pm. In lieu of customary remembrances, the family requests with gratitude that memorial contributions be directed to: Alzheimer's Association of St. Louis, 9370 Olive Street Rd., St. Louis, MO, 63132 . For more information, please access our website, www.leesmanfuneralhome.com. Lawlor Funeral Home, Columbia, IL, handled arrangements.

Roland H. Gantt, 96 years, of Columbia, IL, passed away on October 6, 2020 at his residence in Columbia, IL. He was born July 5, 1924, in Spokane, WA. He was married to Dixie Lee, nee Curtis, Gantt, who survives him. They were married in Columbia,... View Obituary & Service Information

The family of Roland H. Gantt created this Life Tributes page to make it easy to share your memories.

Send flowers to the Gantt family.