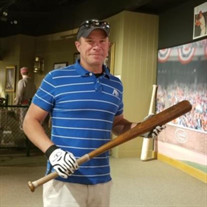 Herrin- Roger Lee “Codge” Sanders, 41, of Herrin, Illinois. He passed away at 4:10 PM, Sunday, June 7, 2020 in Herrin. He was born January 21, 1979, in Herrin to Steve and Sally (Fischer) Sanders. He married Amy Haub on June 4, 2010 in Paducah, KY. He was a proud veteran of the United States Army. After being honorably discharged, he began a career in mining construction. He was employed as a heavy machinery operator and GPS coordinator for Cumberland Excavating in Nashville, Tennessee. He was a member of the UMWA and the American Legion. Roger had a heart of gold, he was very caring, a hard worker, and loving father and husband. In his spare time, he enjoyed watching his sons and nephew, Chase, play sports. He also enjoyed shooting guns, playing video games, loved listening to music, and playing with the family cats- Whisper and Willow. He loved traveling with Amy and the boys to Navarra Beach, FL and Big Splash. He enjoyed playing baseball and softball. He was a avid St. Louis Cardinal and New York Mets fan. He will be greatly missed by family and friends. Surviving are his wife- Amy Haub-Sanders and two sons, Braxton and Braydon Sanders of Herrin; parents - Steve and Sally Sanders of Herrin, father and mother in law, Greg and Terri Haub of Herrin; sister, Stephanie (Justin) Walker of Herrin; nephew, Chase Sanders; niece, Callie Walker; nephews, Austin and Logan Walker and Drake and Levi Haub; brother in law, Chris (Devin) Haub of Herrin; along with other relatives and friends. He was preceded in death by his grandparents A memorial visitation will be held on Saturday, June 13, 2020 at the Herrin Civic Center. Memorial arrangements were entrusted to Leesman Funeral Homes of Southern Illinois under the direction of Devin McCluskie and Joni Binkley-Ross. In lieu of customary remembrances, the family requests with gratitude that memorial contributions be directed to the family so that they might set up a scholarship fund for the Boys. For more information, please access our website, www.leesmanfuneralhome.com.

The family of Roger L. "Codge" Sanders created this Life Tributes page to make it easy to share your memories.

Send flowers to the Sanders family.