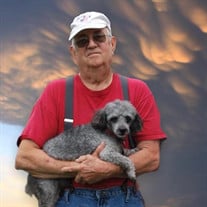 Smithton- Roger James Quirin, 79, of Smithton, passed away at 8:53 PM, Tuesday, August 3, 2021, at his home. Roger was born on November 20, 1941, in Millstadt to Martin and Marie (Roos) Quirin. He was a veteran of the United States Navy. Once honorably discharged, he began a long career as a machinist and retired in Smithton. He was catholic and a member of St. John the Baptist Catholic Church in Smithton. More than anything he enjoyed spending time with his beloved dog and best friend- “Snickerdoodle”. In addition to walking and hiking with “Snickerdoodle”, he enjoyed going to yard sales with his cousin Jim and going to casinos playing poker and slot machines. He was a caring and organized man who loved his grandkids and spending time in his garden and feeding squirrels. He will be dearly missed. Survivors include his beloved “Snickerdoodle”; sons- Roger James Quirin, II and wife Veronica of Boulder City, NV, Matt Quirin and wife Kerri of Mabelvale, AR; daughters- Rusti Gray and husband Gary of Noonan, CA and Sally Eckels and husband Jack of Temple, TX and son Michael Douglas of Arnold, MO , 9 grandchildren, 2 great grandchildren, sister- Elaine Sodam and husband Jerry of Fishers, IN and brother- Mark Quirin and wife Rene of Belleville, and very special cousin- Jim Quirin of Swansea. He was preceded in death by his parents, daughter- Cheryl Ann Quirin, son- Brian King, brother- Frances Quirin and sister- Mary Ann Kennedy. Roger will be cremated and memorial services will be held at a later date. Memorial arrangements were entrusted to Leesman Funeral Home in Millstadt. Memorial donations are suggested to a Humane Society of the donor’s choice and will be accepted at the funeral home. For more information, please visit www.leesmanfuneralhome.com.

The family of Roger James Quirin created this Life Tributes page to make it easy to share your memories.

Smithton- Roger James Quirin, 79, of Smithton, passed away at...

Send flowers to the Quirin family.