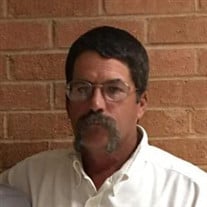 Red Bud- Randy Scott “Swamper” Bingham, 58, of Red Bud passed away at 12:08 AM, Tuesday, May 25, 2021 at his home. Randy was born on November 20, 1962 in Jacksonville, NC to Larry R. and Tillie E. (Arthur) Bingham. He married Linda K. Bertram on September 20, 1996 in Waterloo. He was a hardworking man who owned and operated his own farrier service, Randy Bingham Horseshoeing. He later worked for Harris Drilling and Diewald Utility Services. He was a member of St. Peter United Church of Christ in Red Bud and enjoyed attending the Randolph County Cowboy Church. Randy was a member of the Boy Scouts of America and the Land of Lincoln Horseshoers Association. He was a tough and tenacious man who enjoyed horses. He grew up raising horses with his family and they even owned a couple racehorses. Randy spent several years with his beloved 4-legged friends at Fairberry Farm. Many lifelong friendships were developed there between both animals and people. He enjoyed spending time outdoors doing things he loved like camping, fishing and trapping. He was a personable man who never met a stranger. He loved music by John Prine and three of his favorites were “When I Get to Heaven”, “In Spite of Ourselves” and “That’s the Way the World Goes Round.” He most loved spending time with his family and especially his newborn grandson, Silas. He will be dearly missed by all who knew him. Survivors include his beloved wife- Linda K. Bingham of Red Bud, four daughters- Kendra Bingham of Washington, MO, Hannah Mayberry of Red Bud, Holly (Michael) Kleinschmidt of Millstadt and Rylee Bingham (Lucas Schmidt, fiancé) of Millersville, MO, beloved grandson- Silas Kleinschmidt, father -Larry Bingham of Farmington, MO, brother- Michael (Robin) Bingham of Fairdealing, MO, brother-in-law- Joseph (Lori) Bertram of Quincy and many beloved family members and friends. He was preceded in death by his grandparents, mother, father-in-law, and mother-in-law. The funeral service will be held at 2:00 PM, Friday, May 28, 2021 at St. Peter United Church of Christ in Red Bud. Rev. Cory Hart and Rev. Terry Roberson will officiate. Burial will follow at St. Marcus Cemetery in Red Bud. Visitation will be from 11:00 am until time of service, Friday at St. Peter’s United Church of Christ in Red Bud. Funeral arrangements were entrusted to Leesman Funeral Home in Red Bud. Memorial donations are suggested to the family and will be accepted at the church. For more information please visit www.leesmanfuneralhome.com

The family of Randy Scott "Swamper" Bingham created this Life Tributes page to make it easy to share your memories.

Send flowers to the Bingham family.