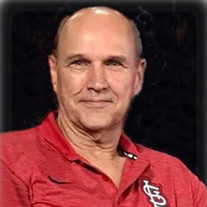 Michael Guy LaCroix, 64, passed away peacefully on September 12, 2021 in the company of loved ones at his home in Dupo, Illinois. Born December 3, 1956 in East St. Louis, Illinois, Guy was the second child of Lester and JoAnne (Pugh) LaCroix. He and his sister, Sherri, grew up fishing and camping at Bluff Lake and playing with other kids at Iglehart’s Tavern. He was a catcher for the Dupo Khoury Baseball League, swam for the Hilltoppers Swim Club, and loved building models. After graduating from Dupo High School in 1974, Guy enlisted in the U.S. Navy and was stationed in San Diego, California for four years aboard a ship traveling on West Pacific assignments. Upon his return to the St. Louis area, Guy married Sandra Rallo and together they raised their two boys, Eric and Matthew. Guy and his sons were always on the move and could often be found riding motorcycles, working on cars, camping at Finger Lakes State Park, and playing hockey and football. A true people-person with an unmatched work ethic, Guy excelled in various sales positions over the years. In his free time, he enjoyed riding his Harley, watching Blues and Cardinals games, taking photos, fixing up his house, listening to rock and blues music, and playing cards with his longtime friends, Steve Dell (Caveman), Larry Lutker (Wolfie), Randy Evans (Boog) and Joey Reis. Guy’s relationship with the Lord was profound; he led a men’s Bible study at First Baptist Church in Dupo and frequently held Bible study in his home. In his final year, Guy worked part-time for Leesman Funeral Home and continued living life to the fullest, attending both the Indy 500 and the first game of the Stanley Cup Finals in Tampa Bay. He will be lovingly remembered for his good humor and friendly personality. He always saw the best in everyone and was quick to offer a helping hand to anyone in need. A devoted father above all, Guy’s legacy will live on in his sons, who share his strength and tenacity, competitive nature, and adventurous heart. Guy is preceded in death by his parents and nephew, Jacob Nelson. He is survived by his sons Matt (Kathy) LaCroix and Eric (Kirsten) Carlton; sister Sherri LaCroix (Jim Jarvis); aunt Connie Shownes; uncle Jerry Pugh; nephew Michael Hutchinson; grand-nieces Samantha and Alexis; several cousins; and dear friends Brian & Dee Ann Rice and Kim & Lori Pullen. His family sends special thanks to everyone who visited and helped Guy in his final days; your companionship and support is sincerely appreciated. Visitation will be Sunday, September 19, 2021 from 2:00 pm - 5:00 pm, at Leesman Funeral Home, Dupo, IL. Services will be held on Monday September 20, 2021 at 9:45 am at Leesman Funeral Home in Dupo, IL., with Rev. Marc Sikma, officiating. Interment will follow in the Jefferson Barracks National Cemetery, St. Louis, MO., with full military honors. In lieu of customary remembrances, the family requests with gratitude that memorial contributions be directed to Wounded Warriors. For more information, please access our website, www.leesmanfuneralhome.com. Arrangements were handled by Leesman Funeral Home.

Michael Guy LaCroix, 64, passed away peacefully on September 12, 2021 in the company of loved ones at his home in Dupo, Illinois. Born December 3, 1956 in East St. Louis, Illinois, Guy was the second child of Lester and JoAnne (Pugh) LaCroix.... View Obituary & Service Information

The family of Michael Guy LaCroix created this Life Tributes page to make it easy to share your memories.

Send flowers to the LaCroix family.