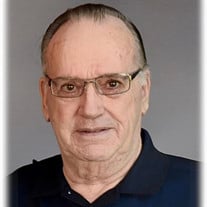 Kenneth L. Nelson, 85 years, of Columbia, IL, passed away on March 1, 2021 in Columbia, IL. He was born July 26, 1935, in Sandy Twp., PA, son of the late George and Grace, nee Heberling, Nelson. He was married to his childhood sweetheart the late Beverly, nee Lydick, Nelson. They were married January 1, 1957. She passed away January 2, 2019. Ken spent his youth in Du Bois, PA. as the second to last son of 9 children. He joined the U.S.Navy out of high school during the Korean War serving for 4 years while stationed in Newfoundland. Following his service, Ken and Bev relocated to the midwest as he attended Parks College in Cahokia, IL. While attending school, John F Kennedy made a declaration of placing a man on the moon putting the aerospace industry in full swing. This launched Ken’s lifelong career which started at McDonald Douglas working on the Gemini program and then he moved to the Army working on the now famous Blackhawk program for the rest of his professional career. Ken and Bev moved to rural Columbia where they spent their years raising their three children. He enjoyed working on any mechanical device as he could repair or repurpose just about anything. People in the community always knew that if they needed tools, a bushel of produce, or a helping hand for any project, they could call Ken. This willingness to help anyone was evident the rest of his life. Surviving are two sons, Douglas (Michele) Nelson of Columbia, IL, and Craig (Julie) Nelson of Columbia, IL; seven grandchildren, Brittany (Brett) Toenjes, Katie Stahr, Samantha Nelson, Amber (Garret) Kasper, Gabriel Nelson, Sophia Nelson, and Jacob Nelson; seven great-grandchildren, Daltyn’s Smith, Tessa Toenjes, Rylee Toenjes, Spencer Kempen, Hunter Kempen, Oliver Kasper, and Suzie Kasper; sister, Shirley Cantor of PA.; brother, Howard Nelson of WA.; along with other relatives and friends. He was also preceded in death by his daughter, Susan J. Jeffery January 2018; grandchild, Crystal L. Becherer December 2016; parents George and Grace Nelson; 4 Brothers and 2 Sisters. Visitation will be held on Tuesday, March, 9, 2021, from 8:30 am - 10:30 am, at Leesman Funeral Home, 218 S. Metter Ave., Columbia, IL. A Memorial Service will be held immediately following the visitation. Private family interment will follow in the Jefferson Barracks National Cemetery, St. Louis, MO. In lieu of flowers, the family requests with gratitude that memorial contributions be directed to: Hospice of Southern Illinois, Inc. 305 South Illinois Street, Belleville IL 62220-2159. For more information, please access our website, www.leesmanfuneralhome.com. Leesman Funeral Home, Columbia, IL, handled arrangements.

Kenneth L. Nelson, 85 years, of Columbia, IL, passed away on March 1, 2021 in Columbia, IL. He was born July 26, 1935, in Sandy Twp., PA, son of the late George and Grace, nee Heberling, Nelson. He was married to his childhood sweetheart the... View Obituary & Service Information

The family of Kenneth L. Nelson created this Life Tributes page to make it easy to share your memories.

Send flowers to the Nelson family.