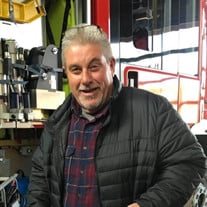 Royalton- Keith L. “Big Daddy” Pursell, 55, of Royalton, passed away at 6:06 PM, Monday, October 4, 2021, at Memorial Hospital of Carbondale. Keith was born on February 18, 1966, in Pinckneyville to James R. “Jim” and Janet (Gibner) Pursell. He married his beloved wife, Brenda Clayton, on May 2, 1988, in Paducah, KY. She survives of Royalton. Keith was hardworking and dedicated man who was an ASE Certified Master Technician and had a passion for all things having to do with automobiles; especially MOPAR. He began his career at an early age when he bought his first car at the age of 14. His mother, Janet, knew then that he was destined to be a gearhead. He began working at Jakes Tire and then later Holts Tire and Auto before becoming shop foreman at Southern Import Repair in Carbondale. In 1994 he started his own auto repair and towing business in his home and eventually relocated to the downtown shop in 2000. He proudly served the Southern Illinois area for 25 years before selling the shop in 2018. Even in “retirement” he ran Pursell Auto Repair from his family’s home; taking care of the auto repair needs of all his close friends and family. He was a tenacious man who enjoyed teaching, mentoring, and encouraging many young people to enter the field of auto mechanics. In his spare time, he enjoyed spending time outdoors camping at Crab Orchard, Little Grassy and Arrowhead Campgrounds in the area. He enjoyed antiquing with Brenda, looking for coffee related items and attending bluegrass festivals all over the US. Keith loved to cook and feed people. His specialties were huge breakfast buffets with homemade biscuits and gravy, bacon, sausage, eggs and all the fixings. He was just as comfortable making amazing pizzas in his wood fired pizza oven and he also knew his way around a smoker. Keith was a man of God and a member of Lone Oak Baptist Church in Energy. He was civically active as an Eagle Scout and was a member of Herrin Prairie Lodge #693 in Herrin. Survivors include his beloved wife- Brenda A. Pursell of Royalton; mother- Janet Pursell of Herrin; son- Jake (Hailey) Pursell of Johnston City; daughter- Rachel (Nick) Neipert of Herrin; three grandchildren including Daniel and James Pursell of Johnston City and Kane Neipert of Herrin; brothers- James R. “Jay” (Bec) Pursell, Jr. of McKinney, TX and Matt (Terri) Pursell of Herrin. Also surviving are several nieces and nephews and many close friends. He was preceded in death by his father- Jim Pursell and beloved Aunt- Thelma Spencer. The funeral service will be held at 12:00 PM, Saturday, October 9, 2021, at Lone Oak Baptist Church in Energy. Pastor David Dyer will officiate. Burial will follow at Denning Cemetery in West Frankfort. Visitation will be from 10:00 AM until time of service, Saturday, October 9, 2021, at Lone Oak Baptist Church in Energy. Funeral arrangements were entrusted to Leesman Funeral Homes of Southern Illinois under the direction of Devin McCluskie. Memorial donations are suggested to Lone Oak Baptist Church (809 Ryan Drive, Energy, IL 62933) and will be accepted at the church. For more information, please visit www.leesmanfuneralhome.com.

The family of Keith L. Pursell created this Life Tributes page to make it easy to share your memories.

Send flowers to the Pursell family.