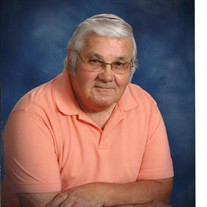 Red Bud- John F. Zika, 82, of Red Bud, passed away at 4:38 PM, Wednesday, June 2, 2021 at Garden Place in Red Bud. John was born on January 2, 1939 in St. Louis, MO to Andrew P. and Edna (Kern) Zika. He served his country bravely while serving in the US Army in the Army Communications Battalion. His battalion was designated to set telephone lines for the Army. Once honorably discharged he returned home and worked for the US Railway Express Agency and then later worked as a custodian and bartender. John was a likeable and simple man who enjoyed watching old westerns, long drives exploring the back roads of southern Illinois, going to Wal Mart, watching the St. Louis Cardinals and collecting bears. He was very involved with the Masonic Lodge and the St. Peter’s United Church of Christ in Red Bud. He was a 50 year member of Abigail-Freedom #636 AF&AM in Mehlville, MO, past Worshipful Master of Red Bud Lodge #427, member of the Scottish Rites of the Valley of Southern Illinois (St. Andrew’s Society) and the Shriners Ainad Temple of East St. Louis and the Randolph County Shrine Club. He was a bellringer at St. Peter’s UCC in Red Bud. He was also a member of the American Legion of Prairie Du Rocher and Red Bud VFW. Survivors include nieces- Sandra Bower of Meridian, MS and Pamel Zika of Mesquite, NV, Nephew Andrew Zika of Las Vegas, NV as well as several great nieces and nephews and his close friends- Orvel Cox, Herman Albers and the brothers of Lodge #427 in Red Bud. He was preceded in death by his parents, brothers- Mike and Robert and niece- Bobbi Zika. A memorial service will be held at 1:00 PM, Thursday, June 17, 2021 at St. Peter’s United Church of Christ in Red Bud. Pastor Cory Hartz will officiate. Inurnment will follow at St. Peter’s United Church of Christ Cemetery in Red Bud. Military honors will be performed at 11:45 AM, Thursday at the church by the Prairie Du Rocher American Legion Post. Visitation will be from 11:00 AM until time of service, Thursday, June 17, 2021 at St. Peter’s United Church of Christ in Red Bud. Masonic rites will be performed by Red Bud Lodge #427 AF&AM, Noon, Thursday at the church. Memorial arrangements were entrusted to Leesman Funeral Home in Red Bud. Memorial donations are suggested to Ainad Shriners Temple of East St. Louis or St. Peter’s United Church of Christ in Red Bud and will be accepted at the church. For more information please visit www.leesmanfuneralhome.com.

The family of John F. Zika created this Life Tributes page to make it easy to share your memories.

Send flowers to the Zika family.