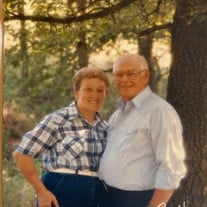 Millstadt- Erma Lee “Tootie” Beyer, 87, of Millstadt, passed away at 3:00 PM, Tuesday, February 23, 2021 at Integrity Health Care of Columbia. Erma was born on April 21, 1933 in Rockville, MO to Ernest Lee and Beulah Mae (Mathews) Woody. She graduated as salutatorian of her high school class with plans to become a home economics teacher. Instead, she chose to marry her soulmate Charles E. Beyer on March 16, 1952 in Brush, CO. He preceded her in death on November 12, 2008 and she had missed him every day since. She was a devoted Navy wife and mother of five who traveled extensively from base to base with her family. After Chuck retired from the Navy, they moved to Nebraska, where she served her community as a school board member. Tootie and Chuck later started Furniture Fixers after their move to Belleville, which gave her a showcase for her upholstery and furniture refinishing talents. She also worked as a bookkeeper but found her true calling as a Massage Therapist. She enjoyed many years working for Dr. Ronald Richter in Belleville until her retirement. Tootie was a strong woman of faith who never met a stranger. She was a member of the Church of Jesus Christ of Latter-Day Saints in Waterloo. She served in many positions and especially loved her time serving as President of the Relief Society. She was a caring and generous woman with her time and with her talents. She was also a creative woman and a talented seamstress. She and Chuck developed a passion for Labrador Retrievers and created Last Port Labs and provided hundreds of puppies over the course of thirty years to many happy families. Survivors include her daughters- Connie Hankammer and husband Curtis of Millstadt and Kari Hanson and husband Hal of Queen Creek, AZ, son- James Beyer of Edwardsville, daughter in law- Marilee Beyer of Columbia, fifteen grandchildren, and eighteen great grandchildren plus two on the way. She was preceded in death by her parents, her husband, Charles, her sons- Kevin and Martin Beyer and a great granddaughter- Sophia Ruth. The funeral service will be held at 2:00 PM, Monday, March 1, 2021 at the Church of Jesus Christ of Latter-Day Saints at 900 Park Street in Waterloo. Visitation will be from 1:00 PM until 1:45 PM, at the same location. Interment will take place at Jefferson Barracks National Cemetery in St. Louis, MO. Funeral arrangements were entrusted to Leesman Funeral Home in Millstadt. Memorial donations are suggested to Helping Strays No Kill Animal Shelter/ 4221 Hanover Road/ Columbia, IL 62236 and will be accepted at the church or funeral home. Flowers can be delivered after 10 AM Monday, at the west door of the church building. For more information, please visit www.leesmanfuneralhome.com

The family of Erma Lee "Tootie" Beyer created this Life Tributes page to make it easy to share your memories.

Send flowers to the Beyer family.