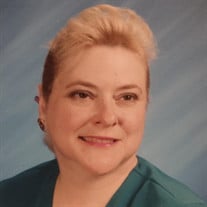 Dupo- Davie Sue Raker, 72, of Dupo, passed away at 12:46 PM, Monday, April 12, 2021 at Mercy Hospital of St. Louis. Davie Sue was born on December 3, 1948 in East St. Louis, IL to David M. and Katherine Lucille (Melton) Raker. After receiving her master’s degree from the University of Illinois, she began a 34-year long career as a high school teacher at Dupo Community High School. She taught advanced English and US History. Ms. Raker was a teacher and a mentor. She was instrumental in opening the door to higher education for hundreds of Dupo students. Respected by all, she will be missed by many. In her spare time, she travelled extensively throughout the US (Alaska), Europe (Ireland, Finland and Sweden) and Asia (Russia and China). She took a special interest in researching and writing a book about the Raker family genealogy. She also enjoyed quilting, playing Trivial Pursuit, and reading fiction by Tolkien or JK Rowling as well as classic and modern English literature. She loved flowers and her favorite color was lavender. She will be dearly missed by her family and friends. Survivors include her brother- Rod Raker of Conneaut, OH, niece- Ravella Raker of Pittsburgh, PA and nephews- David Raker of Toledo, OH and Corbett Raker of Tampa, FL. She was preceded in death by her parents. A private graveside funeral service will be held at 2:00 PM, Friday, April 16, 2021 at Valhalla Gardens of Memory in Belleville. Graveside funeral arrangements were entrusted to Leesman Funeral Home in Dupo. A public memorial service will be announced at a later date. Memorial donations are suggested to the University of Illinois Summer Youth Program or the University of Illinois Foundation and will be accepted at the funeral home or cemetery. For more information, please visit www.leesmanfuneralhome.com.

The family of Davie Sue Raker created this Life Tributes page to make it easy to share your memories.

Send flowers to the Raker family.