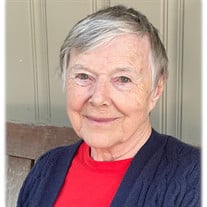 Christina Maria Gertrude Susanna (nee Kleff) Rudolf, 86, of Columbia, Il., born July 3, 1935, in New York, NY, passed away peacefully surrounded by family on September 5, 2021, in Belleville, Illinois. As a child, Christina attended school at the Gymnasium in Bamberg, Germany. As a young girl during the War she learned to knit in the dark and attended middle school in Aachen followed by Bavaria. When Christina was just 18 years old, she left Germany to work as an au pair for a family in New York. Later, Christina worked at Chase Manhattan Bank before returning home to Germany. It was on this particular boat excursion, destination Dusseldorf, where Christina met for the first time the eventual love of her life, Heinz Paul Rudolf. Not long thereafter, Christina and Heinz married on Heinz’s birthday, September 16, 1956, in Germany. Christina had many talents. She was an excellent seamstress who handmade three of her daughters’ wedding and bridesmaids’ dresses. She baked constantly and made delicious yeast breads and jams for all her neighbors. She often made desserts for family and friends, including her own secret recipe for cheesecake. Christina was the ultimate homemaker as she lovingly raised five children while her husband practiced medicine. Christina loved the outdoors and picking fruits and vegetables at various orchards. She planted and maintained rows of apple, pear, and plum trees in a portion of their backyard in Belleville. She did all of her own mowing and pruning while maintaining amazing flower beds. Christina especially enjoyed spending time with her family. She never missed timing for her children at a swim meet or working playground duty during their grade school years. She was an avid snow skier and loved horseback riding. She ran with her children in organized charity races. At nighttime, she would wait to have dinner with Heinz regardless of when he came home from the hospital or office. Christina and Heinz loved television programs like Little House on the Prairie, Perry Mason, Matlock and, surprisingly, L.A. Law. Christina was an active parishioner of Blessed Sacrament Catholic Church in Belleville when the children were growing up. She and Heinz continued their active roles in the church at Immaculate Conception Catholic Church in Columbia, Illinois. Christina lost her best friend Heinz this year on April 17, 2021. They had been married nearly 65 years. She was also preceded in death by her parents, Rudolf Karl Kleff and Maria Bischoff Kleff, and grandson Nathaniel Lucarelli. Surviving Christina are her children, Soraya (Timothy) Massey, Iris Rudolf, Heidi (Mark) Lucarelli, Cordelia (Norman) Smith, Heinz (Sally) Rudolf, and 11 grandchildren: Timothy (Michelle) and Daniel Massey, Katie, Rebecca, and Benjamin Lucarelli, Joshua, Jonathan and Jordan Smith, Hannah (Colin) Chandler, and Gretchen and Anna Rudolf. Christina is survived by one brother, Ralph (Wendy) Kleff. The family wishes to thank Hospice of Southern Illinois and Becky Hardy, RN, as well as the other wonderful staff at Our Lady of the Snows Assisted Living Community for their constant love and affection for Christina. A private funeral service and burial will take place at a later date at Immaculate Conception in Columbia, IL, with Msgr. Carl Scherrer officiating. In lieu of customary remembrances, the family requests with much gratitude that memorial contributions be directed to: Benedictine Living at the Shrine of Our Lady of the Snows, 726 Community Drive, Belleville, Illinois 62223 and Hospice of Southern Illinois, 305 South Illinois Street, Belleville, Illinois 62220. For more information, please visit our website, www.leesmanfuneralhome.com. Leesman Funeral Home, Columbia, IL is entrusted with arrangements.

The family of Christina Maria Rudolf created this Life Tributes page to make it easy to share your memories.

Send flowers to the Rudolf family.