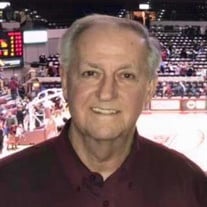 Marion- Ben L. Maragni, 83, of Marion, formerly of Herrin, passed away at 10:05 PM, Wednesday, March 9, 2022 at Herrin Hospital. Ben was born on February 20, 1939 in St. Louis, MO to Peter and Amelia "Millie" (Jurich) Maragni. He married his best friend and soul mate of 52 years, Rosalie Slimak, on June 14, 1969 at St. John's Catholic Church in West Frankfort. She survives of Marion. He was a lifelong catholic and current member of St. Joseph Catholic Church in Marion. In his younger years, he was active within his former parish of Our Lady of Mt. Carmel Catholic Church in Herrin, where he sang in the choir, served as board member and president of the OLMC School Board and was a member of the Knights of Columbus. He was a successful businessman who obtained his MBA from SIU-E. He retired from Shawnee College where he was Director of Small Business Development, though he was most proud of having owned 3 "Just Pants" franchises earlier in his career. Ben was civically active, volunteering his time as a Little League coach for many years and with the Herrin Hospital Auxiliary with Rosalie. In addition to the Knights of Columbus he was a member of the SIU Alumni Association and liked going to SIU basketball games. He loved his Chicago Cubs and went to many games at Wrigley Field. Ben had a wonderful sense of humor and was king of Dad Jokes. He liked to spend time outdoors fishing and photographing wildlife and stills. He spent many years bowling and came close to the elusive "300" game. He was fanatical about his lawn. It was easy to find Ben as he was always outside tending to his beautiful green lawn on his John Deere mower. He was referred to as the "Lawn Ranger" by his family and friends and neighborhood dogs instinctively knew to avoid his lush green lawn. As much as he enjoyed those things, above all he loved God and his children and family. Survivors include his wife- Rosalie Maragni of Marion, daughters- Juli Brewer of Citra, FL and Beth Maragni of Carterville, son- Paul Maragni and wife Sara of Chino Hills, CA, grandchildren- Forrest Simmons, Paul W. Maragni and Mia Harness, brothers- Ray Maragni and wife Roselyn and Robert Maragni and wife Mary Ellen both of West Frankfort, honorary brother and fishing buddy- Steve Slimak of West Frankfort, sister-in-law- Stephanie Klingelsmith of Herrin and several nieces and nephews and great nieces and nephews. He was preceded in death by his parents, brother- Don Maragni and brothers in law- John Slimak and Rick Klingelsmith. The funeral Mass of Christian Burial will be held at 11:00 AM, Friday, March 18, 2022 at St. Joseph Catholic Church/ 600 N. Russell St/ Marion, IL 62959. Fr. Brian Barker will officiate. Visitation will be from 9:00 AM until time of service, Friday, at the church. The family encourages attendees to please wear masks. Funeral arrangements were entrusted to Leesman Funeral Homes of Southern Illinois under the direction of Devin McCluskie. Memorial donations are suggested to St. Jude's Children's Hospital or St. Joseph Catholic Church and will be accepted at the church. For more information please visit www.leesmanfuneralhome.com.

The family of Ben L. Maragni created this Life Tributes page to make it easy to share your memories.

Send flowers to the Maragni family.