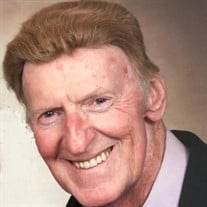 William (Bill) Bernard Wiegard, 82, of Modoc, Illinois, passed away at 9:35 AM, Friday, November 6, 2020 at Red Bud Regional Hospital in Red Bud, Illinois. He was born to the late Albert and Flossie (Ball) Wiegard on September 30, 1938 in Modoc, Illinois. In addition to his parents, he was preceded in death by his sister Emogene Schwartz and brothers Ralph, Butch and Donnie. He married Alouise Lurk on October 31,1959 at Ste Genevieve Catholic Church in Missouri and she survives of Evansville. He is also survived by his two sons- Michael Wiegard of Modoc (Special friend Cindy Barnes) and Mark (Trish) Wiegard of Downers Grove and daughter-in-law Glenna Wiegard of Ellis Grove. His Grandchildren: Shawn (Tiffany) of Red Bud, Larissa (Josh) of Modoc, Sarah (Jon) Pollard of Ellis Grove, Trevor of Chicago and Monica of Portland Oregon. Great grand-children: Ayden, Mason, Langston, Joseph, Harlen and Scarlett. Bill was an active parishoner of St Leo’s Catholic Church his entire life. Bill was a local business owner and started a Sealtest Milk & Ice cream route at 16 years old and retired in 1987 after 33 years. After retirement, he worked for Dehne bus service in Red Bud as a mechanic and bus driver for 23 years. It was not uncommon for kids who are now grown up to come up to him in public and ask if he remembers them and tell him that he was their favorite bus driver. Bill was very proud to have been the bus driver for his first Great Grandchild before he retired. Bill’s favorite hobbies included motorcycle riding with Alouise and the Randolph County Riders, entertaining his grand children and great grand children, Saturday night dances, playing Euchre, being outdoors and generally loving life. Bill was loved by so many people throughout the region. His witty sense of humor is what truly set him apart and his warm heart and kindness was infectious. Bill will be greatly missed but he will be forever remembered by all. A private funeral mass will be held at St. Joseph Catholic Church in Prairie Du Rocher. Fr. Dennis Schaefer and Fr. Sabastian Ukoh will officiate. Private burial will follow at St. Leo’s Cemetery. Visitation will be from 5:00 PM until 8:00 PM, Sunday, November 8, 2020 at Leesman Funeral Home in Red Bud. Memorial donations are suggested to Parkinson’s Research and will be accepted at the funeral home and church. For more information please visit www.leesmanfuneralhome.com.

William (Bill) Bernard Wiegard, 82, of Modoc, Illinois, passed away at 9:35 AM, Friday, November 6, 2020 at Red Bud Regional Hospital in Red Bud, Illinois. He was born to the late Albert and Flossie (Ball) Wiegard on September 30, 1938 in Modoc,... View Obituary & Service Information

The family of William B. "Bill" Wiegard created this Life Tributes page to make it easy to share your memories.

Send flowers to the Wiegard family.