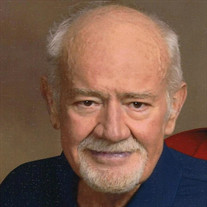 Mr. William E. Casto William E."Bill" Casto, 72, of Millstadt, passed away on Thursday, April 2, 2020 at Barnes Jewish Medical Center, St. Louis. He was born April 2, 1948, in Big Plain, OH to William Everett and Irene Mae (Coil) Casto. He married Suzanne "Susie" Martin on June 20, 1970 at St. Simon and Jude Catholic Church in West Jefferson, OH. Bill was a veteran of the United States Air Force where he served his country bravely as a munitions specialist during the Vietnam War. Once honorably discharged, he returned home and began a long career as a machine tool builder who retired on March 19, 2010 from Hydromat, Inc. of St. Louis. Bill was a life member of Clarence "Bo" Casto VFW Post #7005 in West Jefferson, Ohio, St. James Catholic Church in Millstadt, and the Utapao, Thailand USAF reunion group. He enjoyed spending time outdoors; camping and fishing for bass at Carlyle Lake or Lake of the Ozarks with his family. He was a skilled wood worker who enjoyed spending time in his shop. He was known as a jack of all trades and could fix almost anything. Bill also had a green thumb and enjoyed planting flowers and vegetables, especially Moon Flowers. He was a strong willed, honest, witty man who enjoyed joking around with others, but enjoyed spending time with his family the most. He often said, "My children are the rainbow of my life, and my grandchildren are the pot of gold at the end of that rainbow." Surviving are his beloved wife of almost 50 years- Sue Casto of Millstadt; four Daughters, Kathy (Paul) Quirin of Smithton, IL, Krissy (Col. Marty) Jung of Waterloo, IL, Michelle (Barry) Fultz of Millstadt, IL, Eileen (Craig) Harszy of Waterloo, IL; Son, Bill (Staci) Casto of Millstadt, IL; Grandchildren, Hannah (fiancee- Matt Lane), Abby and Sophie Quirin of Smithton, IL; Jacob, Katie and Megan Jung of Waterloo, IL; Casey and AJ Fultz of Millstadt, IL; Kara and Wyatt Harszy of Waterloo, IL; Jada and Jase Casto of Millstadt, IL; Sister, Linda (Lloyd) Barnhart of Plain city, OH; Brother, Doug (Kim) Casto of MD; Step Mother, Miriam Casto of Columbus, OH; , along with other relatives and friends. Family will conduct a private memorial service, and he will be laid to rest at Jefferson Barracks National Cemetery. In lieu of customary remembrances, the family requests with gratitude that memorial contributions be directed to the U.S.O. for service men and women and the Ronald McDonald House. For more information, please access our website, www.leesmanfuneralhome.com. Arrangements were handled by Leesman Funeral Home - Millstadt.

The family of William E. Casto created this Life Tributes page to make it easy to share your memories.

Send flowers to the Casto family.