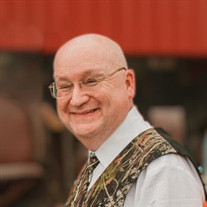 Ted Horn died on August 27, 2021, while working at First Bank in East St. Louis, Illinois, as a security guard. He was killed in the line of duty during a bank robbery. Ted was born on February 27, 1965, and grew up in Belleville, Illinois. He graduated from Belleville West High School. He is survived by his loving wife of 35 years, Jana L. Horn, in St. Libory, his two sons, Zachary Thomas Horn (Elizabeth) in Collinsville, and Joseph Isaiah Horn (Hannah Roland) in Waterloo, grandchildren Scarlett Elliott Horn in Waterloo, and Bowen Sweazey and Blayze Sweazey in Collinsville. He is also survived by his mother, Rosalie J. Horn, in Fayetteville and his mother-in-law, Mary Rose M. (Schaeffer) Elliott, in Belleville. Ted is also survived by his siblings, Louise (Sugie) Horn (Robert) in Freeburg; Linda & (James) Nadler in Freeburg; Marvin Horn, Jr., in Fayetteville, Todd (Kim) Horn in Belleville, and Rod (Theresa) Horn in Belleville, brother-in-law Harold E. Elliott, Jr. (Cathy) in St. Genevieve, Missouri, brother-in-law Mark D. Elliott (Stacy) in St. Elmo, Illinois, and sister-in-law Mary M. (Elliott) Klug (Joe) in Florissant, Missouri, along with several nieces and nephews in the St. Clair County area. He was preceded in death by his father, Marvin F. Horn, Sr., his sister, Gloria J. Stoll (Horn), and his father-in-law, Harold E. Elliott, Sr. Ted was employed by Securitas and had been a security guard for First Bank for about 11 years. He was previously a guard stationed at the United States Attorney’s Office in Fairview Heights for about 14 years. Ted enjoyed fishing with his sons, wood working and most of all spending time with his grand kids and family. Ted was a very humble man, never wanted much, just to enjoy life. He lived believing you treat others the you want to be treated. A memorial service will be held at Wenneman Park in St. Libory on Saturday, September 4, 2021, at noon. Memorials may be made to GoFundMe at https://www.gofundme.com/f/ted-horn-funeral-expenses or to the family.

Ted Horn died on August 27, 2021, while working at First Bank in East St. Louis, Illinois, as a security guard. He was killed in the line of duty during a bank robbery. Ted was born on February 27, 1965, and grew up in Belleville, Illinois.... View Obituary & Service Information

The family of Ted Thomas Horn created this Life Tributes page to make it easy to share your memories.

Send flowers to the Horn family.