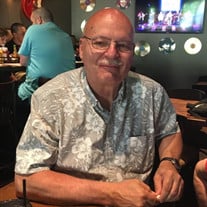 Steven A. Wolf, Age 70, formerly of Dupo, IL, passed away peacefully at St. Louis Mercy Hospital on Friday, December 11, 2020. Steve was born on September 16th, 1950 to the late Allen and Mary (Price) Wolf, the oldest of four siblings. Steven is survived by his wife and soul mate of over 30 years, Deborah (nee Johnson), his sons, Jeffrey (Theresa) of Lockport, IL, and Mark (Kathleen) of Manhattan, IL, and a step-daughter, Kelly (Kotaki) Williams of Tempe, AZ. Steve was an extremely proud “Grandad” to Adelle, Grace, Bryonne, Ethan, Ellis, Emily, Joshua, Olivia, Hannah, and Matthew. He is survived by a brother Wayne (Vickie), a sister Judy (Dean) Riefle, and was preceded in death by a brother, Michael (Rebecca). In 1972, Steve began work at Mobil Oil-Joliet Refinery. There he developed a career spanning nearly 30 years, retiring in 2000. An avid billiards player in his youth, Steve spent time supplementing his income in pool halls and taverns. As good as he was at billiards, he was even better with a deck of playing cards. Many who knew him can probably recall a time seeing Steve at a card table with his customary orange juice and candy bar, waiting to take down a large pot from any would-be gambler foolish enough to sit down. Home pinochle games with his father and brothers were said to be the stuff of legend, turning family into foe faster than the Civil War ever could. Steve lived life on his own accord. A man of strong convictions, he always said what he meant and meant what he said, without fail. You can’t tell the story of Steve Wolf without actually telling a story, as he found himself in more peculiar situations than the average person ever would. He once saved two young boys from drowning in the ocean while vacationing in Florida. On another getaway, Steve wrestled an assailant half his age to the ground after coming to the aid of a defenseless hotel clerk. The fact that he was waiting in the lobby of the wrong hotel at the time only serves to make it an official “Steve Wolf” story. Steve was many different things to many different people, and everyone who knew him has their own story to tell. While his family prayed for a miracle, Steve was granted his own many years ago when he re-united with his beloved “Debbie Sue”. She gave him a wonderful life that he simply could not have lived without her. Former high school sweethearts, Debbie understood and loved him like no one else could. Steve’s legacy is his loving family, wonderful memories of summer vacations, holiday gatherings, especially Christmas, singing Elvis on karaoke nights, and laughter that could be heard throughout the entire house. The true measure of a man is the friends and family he leaves behind and Steve Wolf will be greatly missed by many. Visitation will be held at the First Baptist Church, 620 Godin Ave, Dupo, IL on Thursday, December 17th from 10am-12pm, with the service to be held immediately after. Burial rites will be accorded by Leesman Funeral Home at Valhalla Gardens in Belleville, IL. An open house reception will be held at Mystic Oak Golf Course in Waterloo, IL, beginning at 4pm. All social distancing and face mask precautions will be followed. Memorials can be made in Steve’s name to St. Jude Children’s Research Hospital, 501 St. Jude Place, Memphis, TN 38105. In lieu of flowers, his family would ask that you support a local business or send a thank you to the tireless healthcare workers who live the terrible reality of this pandemic each and every day. The family would like to extend their thanks to the dedicated professionals at Mercy Hospital in St. Louis, MO for their compassionate and attentive care of Steve.

The family of Steven A. Wolf created this Life Tributes page to make it easy to share your memories.

Send flowers to the Wolf family.