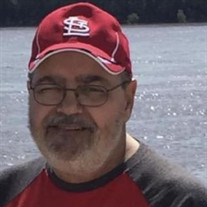 Belleville- Stephen J. “Paw Paw” Kowerko, Jr., 74, of Belleville, passed away at 5:22 AM, Monday, January 10, 2022, at Memorial Hospital of Belleville. Stephen was born on July 19, 1947, in Buffalo, New York to Stephen J. and Bernice (Kosak) Kowerko, Sr. He married Linda Ortega in Waterloo in 1987. He was catholic and a veteran. He was a retired welder having worked many years for Ehrhardt Tool and Die in Pontoon Beach until his retirement in 2014. Once retired he enjoyed spending as much time as possible with his beloved grandchildren. He was a Master “Paw Paw”. He enjoyed bowling and was in many leagues throughout the area. He bowled several 300 games and maintained a high average. As well as being an excellent bowler he played a great game of horseshoes. He was an avid St. Louis Cardinals Fan and enjoyed fishing for whatever was biting. He was musically inclined and played the saxophone whenever he could. Survivors include his wife- Linda Kowerko of Belleville, five children including- Michael and Shawn Kowerko of upstate New York, Gina Kowerko of San Francisco, CA, Tanya Kelly and husband Dan of Belleville, daughter in law- Stephanie Rowe of Belleville, 6 grandchildren- Anthony, Zachary, DJ, Kelsey, Dylan, and Dustin and two great grandchildren, and sister- Rose Marie Moran of Maryland Heights, MO. He was preceded in death by his parents, daughter- Amy Rowe and brother- James Kowerko. The memorial service will be held at 7:00 PM, Thursday, January 13, 2022, at Leesman Funeral Home in Dupo. Fr. Linus Umoren will officiate. A memorial visitation will be from 5:00 PM until 7:00 PM, Thursday, January 13, 2022, at Leesman Funeral Home in Dupo. Memorial donations are suggested to the American Heart Association or Stray Rescue and will be accepted at the funeral home. For more information, please visit leesmanfuneralhome.com.

The family of Stephen J. Kowerko Jr. created this Life Tributes page to make it easy to share your memories.

Send flowers to the Kowerko family.