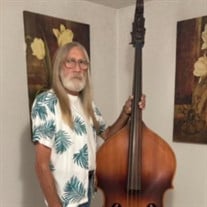 Columbia- Russell Don Griffith, 67, of Columbia, passed away Friday, August 27th, 2021 at Mercy South Hospital in St. Louis, MO. Russell was born April, 1st, 1954 in East Saint Louis, IL to Russell Laverne and Faira Mae (Phillips) Griffith. He married Kathryn “Kate” Meyer on September 2nd, 1978 in Cahokia, IL. He began his career in law enforcement having served as a police officer in New Athens and Sparta and as an US Deputy Marshal in Cahokia. Most recently he worked 13 years as a machinist for Lewis (Weir) Pumps in St. Louis, MO. He was a U.S. Marine veteran who served in the Vietnam War. Russell enjoyed spending his free time deer hunting, target shooting, RVing, and camping. He enjoyed nature, birds, and animals. He enjoyed jamming out with his friends and was learning to play the bass. Russell was known to be a good man who was helpful and had a big heart. Surviving him is his wife, Kathryn Meyer Griffith, sons; James (Amy) Olvitt of St. Peter’s, MO, Danny (Sila) Barks of Greenville, SC, brothers; Norman A. Bivins of Dupo, Mark (Carla) Griffith of Dupo, grandchildren; Joshua, Caitlyn, great-grandchild, Chelsi, along with other relatives and friends. He was preceded in death by his parents and an infant sister. Visitation will be held Wednesday, September 1st from 12PM - 3PM at Leesman Funeral Home in Columbia, IL. Funeral services will be held Wednesday, September 1st at 3PM with Pastor Elizabeth officiating. In lieu of customary remembrances, the family requests that memorial contributions be directed to the donor’s choice or the ASPCA. Arrangements were handled by Leesman Funeral Home.

The family of Russell Don Griffith created this Life Tributes page to make it easy to share your memories.

Send flowers to the Griffith family.