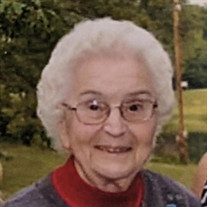 Ruby S. Stellhorn, 89, of Red Bud, IL went to her heavenly home on Saturday, June 5th, 2021 after a short stay at Red Bud Regional Care Center. Ruby was born on July 16, 1931 in Prairie to Ferdinand and Ella, nee Hartmann, Schoenbeck. She was baptized into the Lutheran faith in her parents’ home on August 2, 1931. As a child, Ruby spoke Low-German at home, and when she started attending Trinity Lutheran School, she had to learn High-German. When she was eight years old, World War II broke out, and they were no longer to talk German, so then she had to start learning the English language. She was confirmed at Trinity Lutheran Church on March 25, 1945. She attended one year of Red Bud High School, and then spent the following years serving as a nanny to many local families. Ruby married Alfred Stellhorn on June 6, 1954 at Trinity Lutheran Church. Their marriage was blessed with seven children that they brought up on the family dairy farm, where they all worked together. She enjoyed living in the country, gardening, canning, cooking, baking, milking cows, feeding calves, and listening to St. Louis Cardinals baseball games on her transistor radio. Even though Ruby was very frugal, she was one of the first in Prairie to invest in some modern conveniences such as a washing machine, microwave, and satellite dish television. She was the family historian, being very knowledgeable of Red Bud/Prairie history and genealogy. Later in life, she spent many hours reading, traveling, crocheting, sewing many projects, and mass-producing quilts. These projects were given to family members, given as gifts for all occasions, and donated for fundraising events. She was also famous to her family and others for her Ruby Cookies. Ruby was a lifelong member of Trinity Lutheran Church in Prairie. She was strong in her faith in God, making sure her family went to church, seeing the power of prayer, and being content with the blessed life God gave her. “This is the day the Lord has made, let us rejoice and be glad in it” was her motto in life. She always found the positive in every situation. Surviving her are her children Kathy (Guy) Nagel of Evansville, IL, Nancy (Mark) Schwartz of Prairie du Rocher, IL, and Margie (Eugene) Buch, Sandra (Wayne) Ruhmann, Brian (Jyneane) Stellhorn, all of Red Bud, IL; grandchildren Scott (Ginger) Nagel, Nicole (Brad) Geller, Amanda Ruhmann, Adam (Eva) Buch, Lara (Josh) Voss, Lynne (DJ) Koerber, Danny (Jessica) Schwartz, Mary (Jeff) Kern, Matt Schwartz, and Tommy (Kayla) Schwartz; 15 great grandchildren; sisters-in-law Louella Schoenbeck, Bernice Salger, Irene Stamm, Lorna Schneider, Irma Birkner; brother-in-law Edward (May) Stellhorn Jr; and many nieces and nephews. She was preceded in death by her husband in 2017; parents; daughter in infancy, Amy Stellhorn; son, Kevin Stellhorn; and brother, Elroy Schoenbeck. Visitation will be at Trinity Lutheran Church Tuesday, June 8 from 4:00 to 8:00 p.m. and Wednesday morning, June 9 at 9:00 a.m. with funeral at 11:00. The funeral service will be held at 11:00 AM, Wednesday, June 9, 2021 at Trinity Lutheran Church in Prairie. Pastor Scott Hojnacki will officiate. Burial will follow at Trinity Lutheran Cemetery in Prairie. Funeral arrangements were entrusted to Leesman Funeral Home in Red Bud. Memorials may be made to Trinity Lutheran Church or Hospice of Southern Illinois. For more information please visit www.leesmanfuneralhome.com.

Ruby S. Stellhorn, 89, of Red Bud, IL went to her heavenly home on Saturday, June 5th, 2021 after a short stay at Red Bud Regional Care Center. Ruby was born on July 16, 1931 in Prairie to Ferdinand and Ella, nee Hartmann, Schoenbeck. She was... View Obituary & Service Information

The family of Ruby S Stellhorn created this Life Tributes page to make it easy to share your memories.

Send flowers to the Stellhorn family.