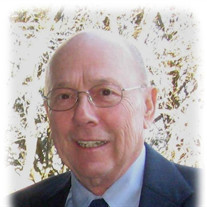 Ronald Arthur Langhans, 83 years, of Indianapolis, IN, and formerly of Columbia, IL, passed away on December 4, 2019. He was born May 20, 1936, in Belleville, IL, son of the late Oliver H. and Louise C., nee Schmidt, Langhans. He was married to the late Shirley, nee Stumpf, Langhans. Shirley passed away April 28, 2018. Ron graduated from Columbia High School in 1954, and St. Louis College of Pharmacy in 1958. He married his high school sweetheart, Shirley Stumpf in 1960. Ron, also opened Ron's Pharmacy on Main St. Columbia in that same year. He loved his community, school, and church, volunteering often and serving many roles. Ron was a member of the Columbia School Board for over 20 years, instrumental in founding the Columbia Convalescent Center, Columbia Strassenfest, and the Columbia Fourth of July fireworks at the American Legion Park. Other accomplishments include, becoming an Eagle Scout in 1949, longtime tireless efforts with the Columbia Booster Club, charter member of the Columbia Quarterback Club, facilitated the construction of the multi-purpose field and baseball field for Columbia High School in 2007, was one of the founders of the Columbia National Bank, member of the St. Paul U.C. of C. Consistory and cemetery board chairman, Columbia Police Commissioner, founder of City Progress, which held debates for elected positions, and initiated the Main Street Christmas and Halloween decorating. Needless to say, Ron loved his community. Surviving are his daughter, Kendra (David Weidmayer) Langhans of Indianapolis, IN, sister, Mary (Paul) Hillestad of Columbia, IL; brother-in-law, Glenn Stechmesser of Columbia, IL, along with other relatives and friends. He was also preceded in death by his sister, Judy Stechmesser. Visitation will be Tuesday, December 17, 2019, 1:00 pm - 2:30 pm, at St. Paul United Church of Christ, Columbia, IL. Memorial services will be held on Tuesday, following the visitation at 2:30 pm, with Pastor Bob Goddard officiating. Interment will follow in the Evangelical St. Paul Cemetery, Columbia, IL. A Celebration of Ron's life will also be held at the Columbia Turner Hall from 5:30 pm - 7:30 pm on Tuesday. All are welcome. Suggested attire for the celebration of life is blue and white. In lieu of customary remembrances, the family requests with gratitude that memorial contributions be directed to: Columbia Unit #4 School District Foundation, 5 Veteran's Parkway, Columbia, IL 62236, or, St. Paul United Church of Christ, 127 N. St. Paul, Columbia, IL, 62236. For more information, please access our website, www.leesmanfuneralhome.com. Lawlor Funeral Home, Columbia, IL, handled arrangements.

Ronald Arthur Langhans, 83 years, of Indianapolis, IN, and formerly of Columbia, IL, passed away on December 4, 2019. He was born May 20, 1936, in Belleville, IL, son of the late Oliver H. and Louise C., nee Schmidt, Langhans. He was married... View Obituary & Service Information

The family of Ronald A. Langhans created this Life Tributes page to make it easy to share your memories.

Ronald Arthur Langhans, 83 years, of Indianapolis, IN, and formerly...

Send flowers to the Langhans family.