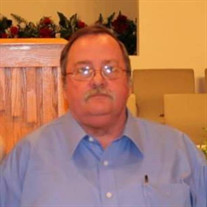 Energy- William Robert "Bob" Vaughn, 72, of Energy, passed away at 3:30 PM, Sunday, February 5, 2022 at Memorial Hospital of Carbondale. He was born on November 9, 1949 in Washington, IL to Robert and Catherine (Schlink) Vaughn. He married Cathy Settle on November 15, 1993 in Benton. Bob was a proud veteran of the United States Navy. Once honorably discharged, he began a long career as a self-employed electronic technician. In his spare time, he enjoyed fishing and spending time with his family and church family. He was active member of Lone Oak Baptist Church in Energy where he served as a trustee, custodian and a member of the Ever-Faithful Sunday school class. He loved his church and volunteered his time driving the bus, making coffee, arranging funeral dinners and making random runs for the kitchen. He liked bringing out the popcorn machine for special events around the church. He will be dearly missed. Survivors include his beloved wife- Cathy Vaughn of Energy, son- Jon Vaughn and wife Tracey of Herrin, daughter- Rachel Meier and fiancée Scott Nelson of Marion, step son- Russell Allen of Springfield, grandchildren- Joseph Vaughn, Nathan Vaughn and wife Amber and Alex Vaughn, great grandchildren Alexandria and Liam Vaughn, sisters- Sharon Penrod and husband Kenny of Herrin and Susan Kerley and husband Bob of Herrin, brothers- Frank Vaughn and wife Rose of Carterville and Michael Vaughn and wife Brenda of Colorado as well as many nieces and nephews. He was preceded in death by his parents and stepmother- Sue Wilcox. The funeral service will be held at 1:00 PM, Wednesday, February 9, 2022 at Lone Oak Baptist Church in Energy. Pastor David Dyer will officiate. Visitation will be from 11:00 AM until time of service, Wednesday at Lone Oak Baptist Church in Energy. Funeral arrangements were entrusted to Leesman Funeral Homes of Southern Illinois under the direction of Devin McCluskie. Memorial donations are suggested to Lone Oak Baptist Church and will be accepted at the church. For more information, please visit leesmanfuneralhome.com.

Energy- William Robert "Bob" Vaughn, 72, of Energy, passed away at 3:30 PM, Sunday, February 5, 2022 at Memorial Hospital of Carbondale. He was born on November 9, 1949 in Washington, IL to Robert and Catherine (Schlink) Vaughn. He married... View Obituary & Service Information

The family of Robert "Bob" Vaughn created this Life Tributes page to make it easy to share your memories.

Send flowers to the Vaughn family.