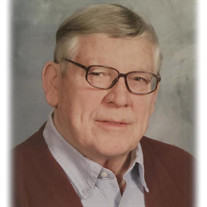 Robert J. Flynn, 93 years of Columbia, IL, passed away on June 14, 2021 at Integrity Health Care of Columbia, IL. He was born November 22, 1927, in Tintah, MN, son of the late Francis and Eleanor, nee Reba, Flynn. He was married to the late Carol Flynn, whom he married September 9, 1949, in Page, ND. Robert was a member of Immaculate Conception Catholic Church, Columbia, IL, where he sang in the church choir. Knights of Columbus, and American Legion Post 338, where he volunteered as a member of the honor guard for many military funerals. He was an aeronautical engineer and had worked on the Apollo moon landing and take-off rocket system. He had served in the U.S. Marine Corp, and was a Veteran of WW II. He enjoyed flower gardening, playing dominoes and "politely" discussing politics. Surviving are his sons, Daniel Flynn of Denver, CO, and James (Cheri) Flynn of Columbia, IL; his daughters, Lisa (Greg) Kenley of Benton, MO, and Julie Cope of Murfreesboro, TN; his four grandchildren, Austin Flynn, Nicholas Cope, Robert (Kaleigh) Cope, and John Flynn; two great-grandchildren, Rachel Rose Cope, and Ramsey Cope; along with other relatives and friends. He was also preceded in death by a daughter, Diana Kelley; two grandchildren, Daniel Flynn, Jr., and Brian Dunn, and his brothers; John Flynn and Francis Flynn; along with a sister, Marjorie Peschel. Visitation will be Sunday, June 20, 2021, from 12 noon - 2:00 pm, at the Leesman Funeral Home, Columbia, IL. A Funeral Service will follow the visitation at 2:00 pm. Interment will follow on Monday, in the Jefferson Barracks National Cemetery, St. Louis, MO, with full military honors. In lieu of customary remembrances, the family requests with gratitude that memorial contributions be directed to: Eugene Schorb - Immaculate Conception School Education Fund, 411 Palmer Road, Columbia, IL, 62236. For more information, please access our website, www.leesmanfuneralhome.com. Arrangements were handled by Leesman Funeral Home.

Robert J. Flynn, 93 years of Columbia, IL, passed away on June 14, 2021 at Integrity Health Care of Columbia, IL. He was born November 22, 1927, in Tintah, MN, son of the late Francis and Eleanor, nee Reba, Flynn. He was married to the late... View Obituary & Service Information

The family of Robert J. Flynn created this Life Tributes page to make it easy to share your memories.

Send flowers to the Flynn family.