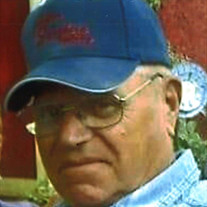 OBITUARY Robert E. Drury, Sr. Robert "Bob" Eugene Drury, Sr., 86, formerly of Cahokia, IL, born 9-7-33 in Bixby, IL, departed this life on April 25, 2020, in Mascoutah, IL, where he was a resident at Brightly Senior Living Facility. Bob served as a Staff Sergeant in the Army from 1951-1958 as a cook serving thousands of soldiers, a passion that he continued to develop over the years and was a great connoisseur of food. He retired as a foreman from the Alton and Southern Railway in 1995 after almost 40 years of service. He was a proud member of the VFW and Moose Lodge branches in Cahokia, IL. Many people, all over, knew his prowess with motors and lawnmowers and he was fondly knick-named "the lawnmower man". He could re-build lawnmowers and spend hours searching for parts to replace and tune- up lawnmowers for family, friends and anyone who came by in need, and often mowed lawns for friends who needed help in his neighborhood. He also re-built and repaired bicycles for the children who dropped by looking for help, a self-less man with a big heart. Bob was an avid car racing fan and followed the races, with enthusiasm and enjoyment for many years, he traveled all over and shared numerous stories and made so many wonderful friends. He enjoyed playing "penny poker" with his friends and later with his son, son-in-law's and grandsons, sharing laughter and making lasting memories. His life was certainly full, but most truly important to Bob was his family. He always put family first and that was filtered down to his children and their children. He was proud of all their achievements and accomplishments. And his grandchildren loved him unconditionally, as he loved them. He spent the last day of his life surrounded by his children as they lovingly embraced their dad and said goodbye to the patriarch and "hero" of the "Drury" family. Bob was preceded in death by his loving wife Darlene Drury "nee" Lynch. His parents; Thomas M. and Flossie M. Drury, his in-laws; John W. and R. Corine Lynch. His brothers; Thomas Drury, Jr., Donald Drury and Jack Drury. His brother-in-laws; Billy Lynch, Darwin Lynch, Eugene Lynch, and Larry Lynch. His sister-in-laws; Lois Lynch and Marty Lynch. His son-in-law, Jeffrey L. Collins, Sr. Survived by his sister-in-laws; Jeanie Lynch and Charlotte Lynch, and cousin; Leslie (Steve) Sopp. Bob is also survived by his five children; son, Robert E. Drury, Jr. (Bettina), Hendersonville, TN, daughters; Donna R. Ladyman (Tim), Dupo, IL, Paula O'Connell (Dan), Hazelwood, MO, Darla J. Ramsbottom (Greg), Andover, MN and Amy R. Gibbs (Todd), Okawville, IL. His eleven grandchildren; Kevin Drury (Michelle), Sandra Drury, Megan (Matt) Brendel, Danny (Britt) O'Connell, Sarah Ladyman, Emily Corine (Josh) Ott, Johanna Ladyman, Amanda (Aaron) Fischer, Kaitlyn (Kyle) Coolidge, Jeffrey (Stephanie) Collins and Robert (Robbie) Collins (our senior high school graduate). And his six great-grandchildren; Logan, Ella and Connor Ott, Madelyn and McKenna Brendel and Kinslee White. Because of the current restrictions a private good-bye was held at Valhalla Cemetery in Belleville, IL where he was laid to rest beside his wife of 61 years and soul mate, Darlene.

The family of Robert E. Drury Sr. created this Life Tributes page to make it easy to share your memories.

Send flowers to the Drury family.