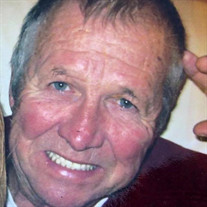 Richard Allen Simmons, 78, of Marion, passed away at 4:10 PM, Wednesday, April 15, 2020 at his daughters’ home in Murphysboro. He was born August 13, 1941, in Goreville to Ira Nimrod and Lillie (Hollis) Simmons. He married his beloved wife of 39 years, Wanda Gayle, in December 13, 1980. Richard was a Christian man and a member and former deacon of Community of Christ in Marion. He enjoyed playing country gospel music and was in several gospel bands in the area. He was a member of the Marion Masonic Lodge AF &AM. He was a witty and adventurous man who ran for the Republican State Senate Seat of the 59th district in 1986. He enjoyed rebuilding antique cars with his daughter Rachette and going to car shows with his beloved wife. He will be dearly missed. Surviving are his wife- Wanda Gayle Simmons, two Daughters, Debbie Stilley and husband Allan and Rachette Simmons-Fiorenzi of Murphysboro, step children- Marie Delaney, Stacy Syers, and Millard Brown; grandchildren- Ian Champion and wife Shadigae, Asa Champion, Leslie Sexton, Michael Stilley, Misty Jorgenson, Robin Lange, Mark Stilley and Caleb Stilley; great grandchild- Elliot Champion; step-grandchildren- Denny Delaney, Jaque Chin and partner Jerry Watkins, Cody Delaney and Owen Brown; step great grandchildren- Brittni and Jackson Chin, Willow Rose Delaney and Tyler LaBelle. Also surviving are many nieces and nephews along with other relatives and friends. He was preceded in death by his parents, adopted son- Richard Simmons Sexton, sister- Shirley Fitzpatrick and brothers- Ira “Buzzy” and William “Billy” Simmons As per his wishes, he will be cremated, and private family services will be held at a later date. Memorial arrangements were entrusted to Leesman Funeral Homes of southern Illinois under the direction of Devin McCluskie and Joni Binkley-Ross. For more information, please access our website, www.leesmanfuneralhome.com.

The family of Richard Allen Simmons created this Life Tributes page to make it easy to share your memories.

Send flowers to the Simmons family.