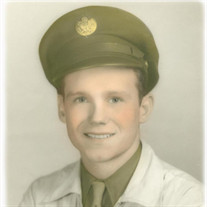 Richard G. Carl, 93 years, of Columbia, IL, passed away on January 13, 2021 at Mother of Good Counsel Home, Saint Louis, MO. He was born May 10, 1927, in East St. Louis, IL, son of the late Cornelius J., and Eleanor, nee Lishmann, Carl. He was married to the late Bernice C., nee Mattli, Carl. They were married October 22, 1949, in St. Louis, MO. She had passed away October 31, 2015. Richard was all about music, music, music of all kinds, and owned quite a record collection. He was known to be able to repair just about anything that could be taken apart and re-assembled. Richard and his wife enjoyed outings with the other Monsanto retirees, camping, and spending time with the rest of the family. He was retired from Monsanto Corp., Sauget, IL. He served with the Army, and was a Veteran of World War II. Surviving are his son, Richard J. (Lois) Carl of Saint Charles, MO; daughter, Susan R. (James) Eckhardt of Affton, MO; four grandchildren, Lori Eckardt, Lynn Eckhardt, Kelly (Mike) Evans, and Jamie (Jared) Krieg; great-grandchildren, Owen and Lily Evans, Maddox and Bryson Krieg; sister, Jacqueline Rast of Fairview Heights, IL, along with other relatives and friends. He was also preceded in death by a brother, Cornelius G. Carl, and brother-in-law, Victor Rast. Due to the Covid-19 pandemic, all services will be private. In lieu of customary remembrances, the family requests with gratitude that memorial contributions be directed to: Alzheimer's Association of St. Louis, 9370 Olive Street Rd., St. Louis, MO, 63132 .

The family of Richard G. Carl created this Life Tributes page to make it easy to share your memories.

Send flowers to the Carl family.