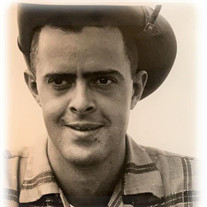 Ray H. "Harry" Aycock, 86 years, of Columbia, IL, passed away on May 12, 2021. He was born January 17, 1935, in Waterloo, IL. Ray was preceded in death by his parents Wayne and Edna (Phillips) Aycock, as well as his brothers Bill and Wilburn Aycock and his sister LaRue Trent. Ray grew up in Waterloo and graduated from Waterloo High School in 1953. In 1957 he entered the Army where he was an operative for the NSA (a spy), in Ethiopia. He left the military in 1960. In 1960 he married Jackie (Koch) Aycock, and they had two children, Andrea (Mike) Hermann and Lt. Colonel Andrew (Dru) Aycock. Ray worked for the Missouri Pacific - Union Pacific Railroad from 1954 until his retirement in 1990. He ended his career with the railroad as the manager of credit and collections. In 1972 Ray volunteered as an EMT with the newly formed Columbia Ambulance Service. He did this for 10 years. After retirement from the railroad he worked as a police/fire dispatcher for the City of Columbia from 1990 - 2000. Ray has five grandchildren who he loved very much. Dan (Christine) Lambert, Gage Aycock, Brett Herrmann, Seth Aycock and Regan Aycock. He has seven great-grandchildren, Justis, Dessa and Arabella Aycock; Gabriel and Jameson Lambert and Selene Aycock and Skyler Aycock. Ray loved his family very much and many happy hours were spent camping and boating with them. He loved to tinker and was creative. For the last 20 years he enjoyed making beautiful articles of stained glass - 4 large windows. He spent hours on the porch watching the birds and working in the lawn. He loved his family, his country and his Lord. He was one of the original 12 who helped to establish Hope Christian Church. He was active in the church until he no longer could attend. He will be missed by friends and family. Visitation will be Monday, May 17, 2021, 3:00 pm - 6:00 pm, at Leesman Funeral Home, Columbia, IL. Funeral Services will follow visitation at 6:00 pm, with Pastor Darrell Jones officiating. Cremation to follow the services. In lieu of customary remembrances, the family requests with gratitude that memorial contributions be directed to: Moms On A Mission, 440 McBride Ave, Dupo, IL 62239 or Heartland Hospice, 333 Salem Place, Suite 165, Fairview Heights, IL, 62208.

Ray H. "Harry" Aycock, 86 years, of Columbia, IL, passed away on May 12, 2021. He was born January 17, 1935, in Waterloo, IL. Ray was preceded in death by his parents Wayne and Edna (Phillips) Aycock, as well as his brothers Bill and Wilburn... View Obituary & Service Information

The family of Ray H. "Harry" Aycock created this Life Tributes page to make it easy to share your memories.

Send flowers to the Aycock family.