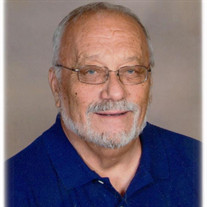 Paul Louis Toenjes, 72 years, passed away peacefully at his home on September 20, 2020. Paul was born on September 3, 1948 to the late Louis and Dora, née Faust, Toenjes. Paul married Barbara “Bobbie“ Toenjes on March 27, 1971. She survives, along with son Brad (Sheri) Toenjes of Columbia, IL and daughter Jennifer (Kevin) Anderson of Webster Groves, MO and four loving granddaughters, Kate and Reese Toenjes, and Lucy and Chelsea Anderson; and brother, James Herrmann of Valparaiso, IN. Paul is also survived by many brothers-in-law and sisters-in-law including Ron and Jeanette Melliere, Joe Hahn and friend Anita Pollard, David and Debbie Hahn and John and Kim Hahn. He was preceded in death by his parents, brothers Robert (Bob) Toenjes and Llewellyn Toenjes. Paul was a lifelong Columbia resident. He graduated from I.C.S. and Saints Peter and Paul High School class of 1966. After high school, Paul proudly served in the United States Marine Corps. He was deployed to Dong Ha, South Vietnam (I Corps) and served with 1st Battalion, 12th Marines, 3rd Marine Division from 1968-1969. He was awarded the Combat Action Ribbon. Paul retired from the Columbia Volunteer Fire Department after serving his community from 1972-1993. He was a former Second Assistant Chief and one of Columbia Fire Department’s first Emergency Rescue Technicians. Paul retired after 42 years as construction manager for Mississippi River Transmission. Paul is a life member of the Veterans of Foreign Wars Post 7980, a member of the Third Marine Division Association and Immaculate Conception Parish. He will be greatly missed by all who loved and cared for him. Visitation will be on Thursday, September 24, 9:30 am - 11:30 am, at Immaculate Conception Catholic Church, 411 Palmer Road, Columbia, IL. A Funeral Mass will be celebrated at 11:30 am, at the church, with Fr. Carl Scherrer officiating. Burial will take place at Jefferson Barracks National Cemetery. During the Covid-19 pandemic, all social distancing and face covering rules will be followed. The family sincerely appreciates your prayers and concerns. Memorials may be made out to Columbia Volunteer Fire Department or Songs4soldiers www.songs4soldiersstl.org. For more information, please access our website, www.leesmanfuneralhome.com. Lawlor Funeral Home, Columbia, IL, handled arrangements.

The family of Paul Louis Toenjes created this Life Tributes page to make it easy to share your memories.

Paul Louis Toenjes, 72 years, passed away peacefully at his home...

Send flowers to the Toenjes family.