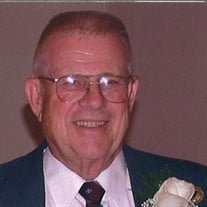 Patrick Henry Mudd, 87, of Dupo, Illinois, passed away on August 5, 2020. Patrick was born in East St. Louis, Illinois, on May 9, 1933. He attended Dupo Community High School and graduated in 1951. He attended Southern Illinois University at Carbondale, receiving a bachelor's in 1955, and a master's in 1959. He also did post graduate work at Bradley University, Peoria, Illinois and Washington University in St. Louis, MO. Patrick taught for 13 years, in the subjects of speech, library, freshman English, government and geography at Mascoutah High School and Dupo Community High School. In 1968, he became superintendent of Dupo Community Unit District #196, where he remained until his retirement in 1991. Patrick believed in education and supported this by chairing the annual Teacher County Institutes, was one of the founding superintendents and chair of Beck Vocational Center, 1972-1983, organized Scholar banquets 1968-1991, and was president of the St. Clair County Administrative Association and president of the Southwest division of the Illinois School Administrative Association.. He also served as president of the Southern Illinois Univeristy Alumni Association, 1980-1988, and president of the Educational Council 100, 1993-1995. He was also involved in the Dupo Lions Club, organizing the annual Easter Egg Hunts and supervising the Glasses for needy Dupo Students, 1968-1990. Patrick was very involved with the Boy Scouts, serving as camp councilor at Camp Vandeventor, outside Waterloo, Illinois for many years and served as District Chairman and on the executive branch. He was an Eagle Scout, 1949, and was awarded the Silver Beaver in 1966, and received the Distinguished Eagle Award in 1969. Patrick was one of the founding members of the DCHS Hall of Fame and was recognized in 1998 for his work with the district. He and his wife, Martha, were honored in the first dedication of the Dupo Walk of Honor, 2004, located at Dupo Park. He also served as representative for the Illinois Retired Teachers Association on the insurance committee, 1998-2003 and the finance committee, 2004-2006 and served many years as president of the St. Clair County Retired Teachers Association. Patrick and his wife, Martha, were world-wide travelers, visiting over 30 countries and nearly all the states in the US. Patrick was particularly interested in the Civil War and World War II, Patrick was preceded in death by his parents, Ralph and Mildred Mudd, his wife of 62 years, Martha, his brothers, Arthur and Glenn Mudd, grandson, Jon Hopkins, niece, Nancy (Phelps) Prather and nephew, Gary Mudd. Patrick is survived by his children, Connie L. Mudd, Patrick (Joyce) Mudd Jr., and Carol (Adam) Gallagher, 2 grandchildren, Shawn (Linna) Hopkins, and Barbara (Mike) Sharrow, and granddaughter-in-law, Bernadette Hopkins, 7 great grandchildren, and 1 great great grandchild, his brother, Ralph (Mary) Mudd II and his sister, Doris Phelps Ogle. Visitation will be held on Sunday, August 9, 2020 from 3-7 p.m. at Leesman Funeral Home in Dupo, IL. Guests are asked to wear masks and practice current social distancing guidelines. Private funeral services will be held. In lieu of customary remembrances, the family requests with gratitude that memorial contributions be directed to: Dupo Community Unit District #196 for a one time scholarship, to St. Clair County Retired Teachers Association Scholarship Fund or to the Village of Dupo for the Dupo Park. For more information, please access our website, www.leesmanfuneralhome.com. Leesman Funeral Home in Dupo, IL, handled arrangements.

The family of Patrick Henry Mudd created this Life Tributes page to make it easy to share your memories.

Patrick Henry Mudd, 87, of Dupo, Illinois, passed away on August...

Send flowers to the Mudd family.