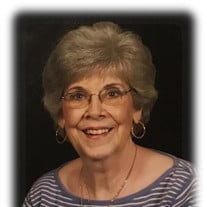 Patricia L Smothers, nee Compton 92 years of Dupo, IL, passed away on February 20, 2020 at Integrity Health Care of Columbia in Columbia, IL. She was born September 12, 1927, in Marion, IL. Pat had worked at Memorial Hospital in Belleville, IL., as a patient accounts representative. She was also heavily in Smother's Insurance Agency for nearly 30 years. She was the past Grand Lecturer of the Eastern Star in the State of Illinois and also past worthy matron of the Monroe County Chapter of the Eastern Star. Pat was a member of the First Congregational Church in Dupo, IL. Pat is survived by her two daughters, Sheryl (Shelby Hileman) Smothers and Sherry (Gary Mappes) Battle, her three granddaughters, Jennifer (John) Brown, Michele Battle, and Heather Franks, her grandson, Keith (LaVondria) Franks, her four great-grandchildren, Brandon Brown, Brooke Brown, Samantha Johnson, and Nadia Franks, she is also survived by a special friend, Sheila Ellis and other relatives and friends. She was preceded in death by her Husband, Norman B. Smothers, whom she married August 5, 1951, her parents, Loren and Verla, nee Stokes, Compton, by her sisters, Ruby, Wanda, Opal and Wilma and her brother Paul. Visitation will be held on Saturday, March 14, 2020 from 2-4 p.m. at the First Congregational Church in Dupo, IL. Memorial service will be held on Saturday, March 14, 2020 at 4 p.m. at the First Congregational Church in Dupo, IL., with Rev. Bob Lee, officiating. The family invites those who would like to attend to join them on Monday, March 16, 2020 at Jefferson Barracks National Cemetery in St. Louis, MO. for a 10:45 a.m. graveside service. Inurnment will be in the Jefferson Barracks National Cemetery, St. Louis, MO. In lieu of customary remembrances, the family requests with gratitude that memorial contributions be directed to St Jude's Children's Research Hospital or to Shriner's Hospital for Children. For more information, please access our website, www.leesmanfuneralhome.com. Arrangements were handled by Leesman Funeral Home - Dupo, IL.

The family of Patricia L. Smothers created this Life Tributes page to make it easy to share your memories.

Send flowers to the Smothers family.