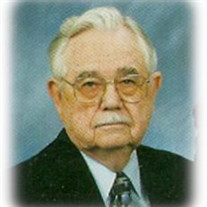 Maurice D. Schneider, 100 years, of Columbia, IL, passed away on April 24, 2020 at Mercy Hospital South, St. Louis, MO. He was born March 6, 1920, in East St. Louis, IL, son of the late Otto C. and Florence, nee Custer, Schneider, He was married to the late Myrtle, nee Dotzauer, Schneider. They were married September 2, 1945, in Columbia, IL. She had passed away November 22, 2014. Maurice was a member of American Legion Post 581, Columbia, IL (past Commander, and over 75 yrs. service to the American Legion). He was a WW II Bronze Star and Purple Heart recipient, having served in combat in New Guinea. He was a member of St. Paul Lutheran Church, where he had served as Congregational President, past member and President of the Columbia School Board, past Columbia Public Library board member, had received the Keys to the City of Columbia for his past civic service, and was able to witness the launch of the USS Columbia Attack Submarine in 1994. He had retired from civil service where he was chief procurement officer of helicopter purchases for the U.S. Aviation and Surface Command. Surviving are four nephews, Donald Dotzauer, Richard Roessler, Roger Roessler, and Robert (Kim) Schneider; two nieces, Karen (Terry) Quirin, and Pat (Johnny) Jones; best friends, Wendy (Bill) Norman, and Leola Schueler, along with other relatives and friends. He was also preceded in death by his daughter, Susan M. Schneider (dec. April 22, 1976); two sisters, Dorothy (Jim) Bangert, and Shirley Schneider; brother, Clifford (Millie) Schneider, and nephew, Dale Dotzauer. Services for Mr. Schneider will be private. Celebration of Life Services to be held at a future date. In lieu of customary remembrances, the family requests with gratitude that memorial contributions be directed to: St. Paul Lutheran Church, 227 Goodhaven, Columbia, IL, 62236, American Legion Post 581, 375 East Locust, Columbia, IL, 62236, or "The SMART Ride", Ft. Lauderdale, FL. For more information, please access our website, www.leesmanfuneralhome.com. Lawlor Funeral Home, Columbia, IL, handled arrangements.

The family of Maurice D. Schneider created this Life Tributes page to make it easy to share your memories.

Send flowers to the Schneider family.