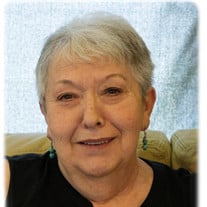 Mary Theresa Menees, 69 years, of Millstadt, IL, passed away on April 20, 2021 at St. Louis University Hospital, St. Louis, MO. She was born December 13, 1951, in East St. Louis, IL. She was the daughter of the late Carl and Anna, nee Kukla, Lee. She was married to Ivan Menees, who survives her. Mary graduated high school in 1968 and immediately was hired to work at Southwestern Bell Telephone Co., she retired after 30 years of service. Mary married Ivan Menees in 1971 and they raised three children. Mary was devoted to her family. She was a loving mom and "Don Don" to three grandchildren. Also surviving are her children, Robin (Christopher) Grudzinski, Sara Menees and Kenneth Menees; granddaughters, Sabrina Grudzinski, Olivia Grudzinski, and Nylah Hunt; brothers, Stephen (Cindy) Lee and Jerry Lee, along with other relatives and friends. She was also preceded in death by sisters, Allis Watson and Rose Marie Santen. Per Mary's wishes, cremation will be held. A memorial visitation will be held on Tuesday, April 27, 2021 from 5pm -7pm at Leesman Funeral Home, Millstadt, IL. In lieu of customary remembrances, the family requests with gratitude that memorial contributions be directed to: Boy's Town, P.O. Box 8000, Boys Town, NE 68010.

The family of Mary T. Menees created this Life Tributes page to make it easy to share your memories.

Send flowers to the Menees family.