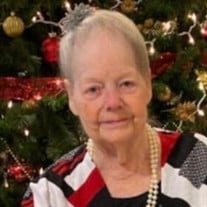 Mary E. Fowler, 85, Red Bud, formerly of Nashville, TN, passed away at 12:52 PM, Wednesday, April 29, 2020 at Oak Hill Care Center in Waterloo. She was born May 18, 1934, in East St. Louis to Robert and Adele (Kukarola) Walsh. She married her husband of 61 years, Donald L. Fowler, and her preceded her in death on January 24, 2013. Mary was a successful business woman. She was a tenacious and feisty woman who loved animals and traveling and spending moments with her family when she was able. Surviving are daughter, Pamela Fowler of Hermitage, TN; grandchildren- Don, Blake, Stephanie, Ryan and Kristina, great grandchildren, two brothers, Robert (Margie) Walsh and William (Debbie) Walsh both of Troy; and sister, Julia M. Cathell of Red Bud along with many nieces and nephews and other relatives and friends. She was preceded in death by her parents, husband and daughter, Judith Kirby. As per her wishes, she will be cremated and placed with her husband at Woodlawn Memorial Park in Nashville, TN. Memorial arrangements were entrusted to Koch-Liefer Funeral Home in Red Bud. In lieu of customary remembrances, the family requests with gratitude that memorial contributions be directed to Alzheimer's and Dementia Research . For more information, please access our website, www.leesmanfuneralhome.com.

The family of Mary E. Fowler created this Life Tributes page to make it easy to share your memories.

Send flowers to the Fowler family.