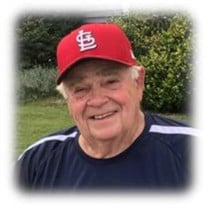 Marvin E. Rodemich, 79 years, of Columbia, IL, passed away on February 6, 2021 at St. Elizabeth Hospital, O'Fallon, IL. He was born March 4, 1941, in East St. Louis, IL, son of the late Walter, and Viola, nee Hofstetter, Rodemich. He was married to Ruth Ann, nee Stumpf, Rodemich, who survives him. They were married January 31, 1965, in New Hanover, IL. For those who knew him, Marv was never a man of titles. Instead of listing all of Marv’s accomplishments and committees served, we want to focus on the man Marv was. People gravitated towards him. He had a genuine smile, a pat on the back, a positive message for your day, a bit of sports trivia or a famous, warm Marvin hug. People loved Marv because he glowed with the light of Christ. Marv wore many hats - a farmer, a greenhouse manager, a school bus driver, and a Sunday School teacher. But his favorite roles in life were that of Ruth Ann’s husband, as Papa and as a Christian through and through. Marv and Ruth Ann started playing footsies in 1957 and built a family that stood strong on his broad shoulders. Marv loved being a Grandpa to Corey, Ryan, Allie and Maci. He loved watching their sports activities from the front row, always ready to give them a thumbs-up when their eyes connected. He also loved visiting with Ryan for smiles and hugs. Marv’s hobbies brought him great joy in life. He passed down his love of deer hunting to his son, Scott and his grandson, Corey. The highlight of every year was when he could be at “deer camp” with the guys at Buettner’s cabin. He loved to fish with his buddies at Bissel and Reelfoot Lake. He was a true Cardinals fan. In later years he spent a lot of time playing Kloepper throughout the county and, oh yes, one year he was crowed the King of Kloepper! Also, surviving are his daughter, Chris (Bill) Browne of Columbia, IL; daughter-in-law, Julie A. Rodemich of Columbia, IL; grandchildren, Corey Browne, Ryan Rodemich, Allison Rodemich, and Maci Browne; sister, Shirley (Arlen) Harres of Columbia, IL; sister-in-law, Kathie (John) Harris of Houston, TX; brother-in-law, Glenn (Lisa) Stumpf of Columbia, IL, along with other relatives and friends. He was preceded in death by his son, Scott Rodemich. Due to the Covid-19 pandemic, all services will be private. Interment will take place in the Evangelical St. Paul Cemetery, Columbia, IL. In lieu of customary remembrances, the family requests with gratitude that memorial contributions be directed to: Christ Community Lutheran Church - General Fund, or Beverly Farm Foundation (Ryan Rodemich's residential community), 6301 Humbert Road, Godfrey, IL 62035. For more information, please access our website, www.leesmanfuneralhome.com. Lawlor Funeral Home, Columbia, IL, handled arrangements.

The family of Marvin E. Rodemich created this Life Tributes page to make it easy to share your memories.

Send flowers to the Rodemich family.