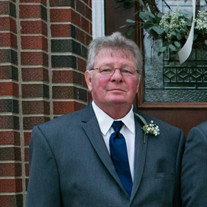 Ellis Grove – Mark R. Fehr, 67, of Ellis Grove passed away Tuesday, July 21, 2020. Mark was born on July 21, 1953 in St. Louis, MO to Oliver J. and Vera M. (Farrar) Fehr and was baptized and confirmed in the Lutheran church. As a coal miner, he spent his career at Ziegler Coal Company and other area mines. As a union representative of the United Mine Workers of America, he was a passionate advocate for mine safety. He was also a former member of the Randolph County Rod & Gun Club. Mark was an engaging story-teller with a quick wit. He had an adventurous spirit and loved spending time outdoors--enjoying a number of activities including skydiving in his younger days. He was a thoughtful and caring father, brother and friend who will be dearly missed by all. He is survived by his daughter, Melissa Fehr of Chesterfield, MO; son, Matthew (Ashley) Fehr of Columbia, IL; former wife, Jean Fehr of Red Bud, IL; brother, Steve (Sue) Fehr of Murphysboro, IL; brother, Scott Fehr of Nashville, IL; as well as many nieces, nephews and cousins. He was preceded in death by his parents; brother, David (Cheryl) Fehr; and his beloved dog, Bella. A private service will be held in his memory at a later date. Memorial arrangements were entrusted to Leesman Funeral Home in Red Bud, IL. As an expression of sympathy, memorial contributions can be made to the American Diabetes Association. For more information please visit www.leesmanfuneralhome.com.

The family of Mark Robert Fehr created this Life Tributes page to make it easy to share your memories.

Send flowers to the Fehr family.