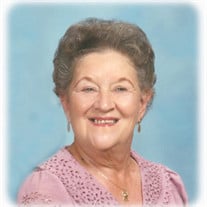 Luella Cowell (nee Brown) died on Thursday, November 12, 2020, with her family at her side. She was born May 18, 1921, in Modoc, IL. She was a member of St. John’s Catholic Church. Luella was active in the Firemen Wives group, was a charter member of the North County Country Club, and was active in the women’s golf league for many years. In her early years, she worked at restaurants and helped her husband and father in law on the farm. She also worked at Cowell Clothing Store. She liked fishing and was a respected golfer. She enjoyed playing at area casinos and trips to Las Vegas and Tunica. She loved the Cardinals and listened to every game. She was a renowned cook. Her greatest joy was her children and grandchildren. She was the daughter of the late Harry and Lena Brown. She was preceded in death by her husband, Louis Cowell, her sisters Burnett (Lee) Robert, Marjorie (Dean) Berry, Albertha (Greg) Doiron and her brothers Myron and Marvin Brown and many nieces, nephews, and friends. Her mother-in-law, Justine Cowell, and her father-in-law, Emmett Cowell and her sons-in-law, Dick Wiegard and Ray Spahr also preceded her in death. She is survived by her brother, Robert (Jean) Brown and her children Jean (Ray) Spahr, Joan (Dick) Wiegard, Cathy (Lee) Demick, Justine (Terry) Liefer, and Louis Cowell, Jr. and partner Gus Zozaya. Her grandchildren Brett (Joy) Spahr of St. Charles, MO., Brad (Kelly) Spahr, Dawn (Steve) Kueker, Shawn (Chris) Liefer, Stacy (Dale) Schmitz, Sandy (George) Dobbs, Brandon (Tammy) Liefer, Dustin (Crystal) Liefer, Quinn (Josh) Johnson as well as her great grandchildren Nicholas Spahr, Jack Spahr, Alex Kueker, Madison, Kaitlyn, and Danielle Schmitz, Zachary, Cameron, and Carley Dobbs, Devin Johnson, Brittany Crow, Dylan Eschman, Devin Johson, Payton and Elsie Liefer, as well as her great great grandchild Karsyn Beare-Schmitz. Due to the Covid - 19 Pandemic, all services will be private. She will be laid to rest next to her husband at St. John's Catholic Cemetery, Red Bud, IL. In lieu of customary remembrances, memorial contributions may be made to St. John The Baptist Catholic Church, Red Bud, IL, or the Lu Cowell Fund.

The family of Luella C. Cowell created this Life Tributes page to make it easy to share your memories.

Send flowers to the Cowell family.