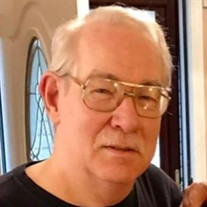 Louis C “Buck” Steckenrider, 72 years of Herrin, passed away at 5:45 am, Thursday, July 22, 2021 at the VA Community Living Center in Marion, IL. Louis was born January 14, 1949, in Herrin to L.V. and Jewell M. (Medlin) Steckenrider. Buck was an Air Force veteran having served during peacetime. After his honorable discharge, he went on to work at Pennzoil in the Ordill area, the VA Hospital and Sears in Marion. Buck was an avid reader of the Bible and a devoted Christian. He loved to read, listen to music and watch movies. One of his favorite things to do was to spend time with all of his nieces and nephews and his best friend/cousin Carl (Carol) Aronson. Surviving are sisters, Nancy Pierson of Blue Mountain Lake, NY, Judy (Randy) Lynn of Herrin, IL and brother Troy Steckenrider (fiancée Annette Murphy) of Phoenix, AZ; nieces, Tara Lynn Brandon of Herrin, Michelle Pierson Hutchins of NY and nephews; Ryan Lynn (significant other, Kelly Hughes) of Herrin, Lance (Liz) Pierson of NY and TJ Steckenrider of Texas; great nieces, Jenna, Libby Stephanie, Amber, Melanie, Arista, and Kelsey and great nephews; Matthew, Nicholas, Bryce, Garrett and several loving cousins. He was preceded in death by his parents, his brother-in-law, Joe Pierson and his nine uncles, and four aunts. A graveside funeral service will be held at 11:00 am, Tuesday, July 27, 2021 at Herrin City Cemetery. Pastor Michael Neubert will officiate. Military honors will be provided by The Herrin/Carterville American Legion and the United States Air Force. Friends and family are asked to meet directly at graveside. Funeral arrangements are entrusted to Leesman Funeral Homes of Southern Illinois under the direction of Devin McCluskie. In lieu of flowers, the family requests donations be made to Community Living Center Hospice Program at Marion VA, 2401 W. Main, Marion, IL 62959. For more information, please visit www.Leesmanfuneralhome.com

The family of Louis "Buck" Steckenrider created this Life Tributes page to make it easy to share your memories.

Send flowers to the Steckenrider family.