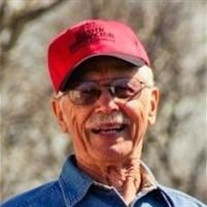 OBITUARY Joseph N. Verdu Jr. Joseph Nicholas Verdu Jr., 91 years of Millstadt, IL, passed away on January 25, 2020 surrounded by his loved ones. He was born October 27, 1928 to Joseph M. Verdu and Nellie L. Verdu (nee Roland). He was affectionately known as "Jumpin Joe" and "Happy Jose". He was born and raised in Fairmont City, IL., and very proud of the fact his father was Spanish Immigrant who became a Union Organizer. He graduated from Central Catholic High School in the East St. Louis and attended St. Louis University for a year before being drafted into the Army. Prior to and during his Army time he met and married Marilee M. Verdu (nee Martin). He became the Pin Weight Boxing Champion during his time in the Army. After an Honorable Discharge he was hired at Dow Chemical that became Phelps-Dodge Aluminum, that became Consolidated Aluminum (Conalco). After 33 years he retired and started a lawn business called Lawn In Order. He was also a co-owner of Have-A-Home Trailer Court in Fairmont City, IL. A few years into retirement Joe and Marilee purchased a horse boarding farm and together created Red Barn Farms. He loved the farm and farm life. That was his heaven on earth. He was a member of the Knights of Columbus and a 4th Degree Knight. He spent a good deal of time hunting, fishing, and gardening. Hunting and fishing at Horseshoe lake were a big part of his life growing up. Joe loved God, Marilee and his family. He believed in working hard and being honest. And was always available to help others. Joe and Marilee played guitars and had sing alongs ever since any of us can remember. They loved music and loved to share it as well. Anyone who knew him fondly remembers the sing alongs. Soccer was his life long passion and he was one of the founders of Belle-Clair Soccer that is still thriving to this day. He was a member of St. Henry's Catholic Church and then St. James Catholic Church after moving to Millstadt, IL. He was preceded in death by his wife Marilee, son, Joseph M. Verdu, two sons-in-law, Michael Mueller and Ralph Bertelsman, two sisters, Elena Cory and Anna Anderson, a brother Frank Verdu, sister-in-law Maxine Green and three brothers-in-law,Charles Cory, Robert Anderson and Roy Green and a friend Gary Keplar. He is survived by his children Pamela Mueller (John Holland), Tim Verdu, Lisa (Donny) Carpenter, Janet (Otto) Jakob, Carole (Jeff) Nieroda and Andrew (Brandi) Verdu. His grandchildren, Sarah (Joe) Hillebrand, Emily ( Greg) Bomleny, Joe ( Kaylee) Daniel, Lauren (Doug) Patterson, Elizabeth Mueller, Chad (Marcie) Holland, Ryan (Julie) Holland, Lieutenant Katie Carpenter, Jennifer Carpenter, Kristy (Caleb) Ashworth, Katie Bertelsman, Jerry Turner and Jack Turner, Nick Nieroda (fiance Ally Scharf) and Katie Nieroda and 18 great grandchildren, sisters Honsey (Richard) Schnieder and Lola Luther and brother Eugene Verdu, sister-in-law Rosie Verdu, many nieces and nephews who he dearly loved, and a special friend Jim Threlkeld. Visitation will be Monday January 27, 2020 from 3:30-8 p.m. at St. James Catholic Church in Millstadt, IL and on Tuesday January 28, 2020 from 9-10 a.m. at St. James Catholic Church in Millstadt, IL. Funeral Mass will be held on Tuesday January 28, 2020 at 10 a.m. at St. James Catholic Church in Millstadt, IL with Father Marvin Volk, officiating. Interment will follow in the St. James Catholic Cemetery in Millstadt, IL. In lieu of customary remembrances, the family requests with gratitude that memorial contributions be directed to Equus Rescue and Therapy P.O. Box 1032 Columbia, IL 62236 or to St. James Catholic Church School Fund in Millstadt, IL. For more information, please access our website, www.leesmanfuneralhome.com. Arrangements were handled by Leesman Funeral Home in Millstadt, IL.

The family of Joseph N. Verdu Jr. created this Life Tributes page to make it easy to share your memories.

Send flowers to the Verdu family.