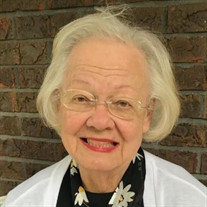 Johann Lucille Reynolds (nee Upchurch), 87, died October 15, 2019, after a lengthy battle with dementia. Johann is survived by William Reynolds. They married on September 3, 1955. Also surviving are her children, Dirk Reynolds and Jan Eden (Terry), four grandchildren, Dawn, Sarah (Jeremy), Aaron and Carrie, five great grandchildren, Brandt, Austin, Carly, Brady, and Noah, brother, James (Doris) Upchurch, sister in law, Margaret Reynolds, and many nieces and nephews. She was preceded in death by her parents, James and Eunice Upchurch, her in-laws, William and Carrie Reynolds, her brothers, Robert Upchurch and Carl Upchurch, her sisters, Jeanette Gericke and Cathrine Harberding, brothers in law, Bob Harberding, Del Gericke and Harry Reynolds, sisters in law, Jean Upchurch and Earline Upchurch, and nieces, Sue Lynn Reynolds & Julie Upchurch Gummersheimer. Although Johann worked several jobs in her young married years, her favorite job was being a wife and a mother. Johann and William were blessed through adoption but she made it clear to everyone that her children were given to them by God and no difference would be made. She held true to that and worked the full-time role of mother and homemaker her entire life. Until the dementia diagnosis, she was still in charge of the household, which was obvious to everyone! Family meant the world to her, especially her brothers, sisters, nieces, nephews, and cousins. She would talk endlessly about growing up in Cahokia close to her siblings and all of the adventures they had through the years. When everyone started going their separate ways to start their families, they still remained close. As time passed, the visits may have been fewer but the stories never stopped and always put a smile on her face. As her memory faded the past few years, she began seeking out those who went before her. There is a certain joy knowing that she is reunited with them and at peace. A special thank you to Heartland Hospice (Bonnie, Tina, Karen, Jason and Pete) and the amazing care and support they provided. William and Dirk spent many long hours caring for Johann and it made them feel good when Heartland assured them they were doing everything right. Special thanks to Ashley Osborne, who stepped up when she was needed most, comforted Johann and helped us get through the difficult times. Dementia is a sad, slow disease. It hurts when someone you know forgets who you are. The important thing is never to forget who THEY are and to provide the same love that was given before their memories were gone. Johann loved everyone to the end. “When we lose someone we love we must learn not to live without them, but to live with the love they left behind.” - Unknown A Celebration of Life will be held on Sunday, November 10th beginning at 1:30 pm at First Baptist Church of Columbia, Illinois. In lieu of flowers, the family suggests donations to Alzheimer’s Association. For more information, please access our website, www.leesmanfuneralhome.com. Arrangements were handled by Leesman Funeral Home - Dupo, IL.

The family of Johann Lucille Reynolds created this Life Tributes page to make it easy to share your memories.

Send flowers to the Reynolds family.