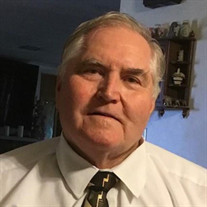 James Richard "Rich" Candler, 78, of Red Bud, passed away on August 26, 2020 at his home. Rich was born March 20, 1942, in Red Bud to James Harold and Elizabeth Anna (Kalmer) Candler. He married Ruby Helen (Ehlers) Naeger on November 25, 1971 in Perryville, MO. He began a long career in carpentry right out of high school when he went to work for the family's business- " Candler Construction". Rich retired from Illinois Excavating in Ruma where he worked many years operating heavy equipment and driving piling. He could fix most anything. He was a hardworking man who was a long time member and Elder of the Waterloo congregation of Jehovah's Witnesses. He served on the Regional Building Committee and was instrumental in helping build and remodel hundreds of Kingdom Halls throughout southern Illinois and Missouri, including 2 in Alaska. He was a soft-spoken man who never met a stranger. His friends called him “the gentle giant” since he was kind and compassionate, who loved to give to others. He was a jack of all trades and a master of carpentry. He enjoyed spending time with his 8 children and numerous grandchildren. He also enjoyed the simple things like a good cup of coffee and a RC Cola. He will be dearly missed by all who knew and loved him. Surviving are his wife- Ruby Helen Candler of Red Bud, five sons, Michael (Helen) Naeger of Red Bud, Richard (Mariden) Naeger of Ruma, Curtis Naeger of New Athens, James (Sharon) Candler of Colorado Springs, CO and Joseph (Staci) Candler of Red Bud; three daughters, Janis (Paul Rankin) Burdell of Red Bud, Jennifer (Darren Rieke) Candler of Red Bud and Julianna Candler of Red Bud; 21grandchildren,; 21 great grandchildren and 3 great great grandchildren; brother, Ronald (JoAnn) Candler of Rocher; sister, Rosemary Wieson of Red Bud and sister in law, Nancy Candler of Red Bud. Also surviving are many nieces and nephews, great nieces and nephews, his Kingdom Hall family, his many work friends and associates throughout the years. He was preceded in death by his parents, brother- Roy Candler A virtual memorial service will be held September 26. Memorial arrangements were entrusted to Koch-Liefer Funeral Home in Red Bud. Topic: Memorial Service for James Richard (Rich) Candler Time: Sep 26, 2020 02:30PM Central Time (US and Canada) Join Zoom Meeting https://us02web.zoom.us/j/82846633486… Meeting ID: 828 4663 3486 Passcode: 474757 A video slide show presentation with be shown before the service at 2:30 as well as after. The service will start at 3:00 pm. If the first meeting is full or you would like to view only, please join the secondary zoom meeting using Join Zoom Meeting https://us02web.zoom.us/j/82647045785… Meeting ID: 826 4704 5785 Passcode: 950589 This is view only. In lieu of customary remembrances, the family requests with gratitude that memorial contributions be directed to the Waterloo Congregation of Jehovah's Witnesses. For more information, please access our website, www.leesmanfuneralhome.com.

The family of James Richard "Rich" Candler created this Life Tributes page to make it easy to share your memories.

Send flowers to the Candler family.