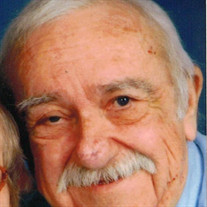 In memoriam Herbert Leighton Hale, born September 21, in Pikeville TN, made his transition to his heavenly home on June 3, 2020 at his Caseyville IL home following a prolonged illness. He was 79 years old. Herb became a follower of Jesus much later than most Christians. After experiencing the Holy Spirit's profound conviction of separation from God, Herb repented his sin, and believed upon Jesus Christ for forgiveness and eternal salvation. Herb departed this world knowing his name was written in the Book of Life, and is awaiting resurrection in the Day of the Lord to eternal life and fellowship with the Father, and his Son Jesus Christ. The fourth of five children, Herb was raised on his parent's back woods farm in the Sampson Community of Bledsoe County TN, and there he spent his happy youth in the company of a brother, three sisters, nearby cousins, and many other neighbors. After graduating from Bledsoe County High School in 1959, Herb married Norma Jean Hale (Meyers) and moved to Pikeville TN where he raised two sons while owning, and operating the Sugar Bowl, a Main Street diner. Always a gregarious person, Herb enjoyed operating his small town diner for several years. Herb worked as a truck driver until he found employment in Illinois as a chartered tour bus driver, a career he dearly loved. Herb greatly enjoyed encountering the scenic vistas and historic destinations as well as interacting with people from all walks of life on countless trips across the USA and Canada. He retired from Gillespie based Cavallo Tour Bus Company after a 30 year career as a tour bus driver. While working in Illinois, Herb met his life partner, Sharon Wrigley, of Caseyville IL who worked for Peabody Coal and helped operate a local diner. Herb, and Sharon married on July 8, 1974. They lived in her childhood home in Caseyville until his death over 45 years later. After retiring, Herb immersed himself in the church, and community activities. To beautify his Caseyville community, he helped organize many clubs, groups, and organizations. Herb loved to participate in fundraising projects sponsored by the all volunteer Caseyville Fire Department. Herb also enjoyed volunteering at other department projects and activities for the community and children. He loved the children's laughter, and happiness. Herb was a active member of the Sterling Baptist Church in Fairview Heights IL, where he faithfully attended worship services each Sunday, and Wednesday. Herb participated in many of the special ministries of the church. Herb is survived by his wife of 45 years, Sharon (Wrigley) Hale; son Jeff Lee Hale; grandsons Jeff Tyler Hale and Herbert "Bubba" Leighton Hale III; granddaughter Amanda Nicole Hale; sisters Dorothy Ann (Hale) Bayless and Nina Carol (Hale) Nale; brother-in-law John Arnold Nale; nieces Melissa "Lisa" Bayless and Deanna Dodson; nephews Howard Hink Bayless, Wade (Sandy) Dodson, Mike (Leslie) Nale, Mark Arnold Nale, and John David (Jill) Nale. Herb was preceded in death by his parents, Herman Walter Hale and Ethel Marie (Panter) Hale; son Herbert Leighton Hale Jr.; brother Robert Walter Hale and Robert's wife Amy Sue (Dodson) Hale; sister Dana Evelyn (Hale) Dodson and Dana's husband Robert Ernest Dodson Jr.; nephew Herman Taylor Bayless and Herman's wife Marjorie Gentile Bayless. He will be missed by a host of relatives, friends, and neighbors from Bledsoe CountyTN to Caseyville IL. A limited visitation was held on June 5, 2020 at Leesman Funeral Home in Dupo, IL followed by a brief family remembrance and prayer led by Pastor Ed Ingram. There will be no interment, and Herb wished to be cremated. But a memorial service at Sterling Baptist Church will be held after current restrictions are lifted. The family is of limited means. In lieu of flowers, contributions to help with Herb;s final arrangements would be much appreciated and can be made to the family directly.. For more information, please access our website, www.leesmanfuneralhome.com. Arrangements were handled by Leesman Funeral Home in Dupo, IL.

In memoriam Herbert Leighton Hale, born September 21, in Pikeville TN, made his transition to his heavenly home on June 3, 2020 at his Caseyville IL home following a prolonged illness. He was 79 years old. Herb became a follower of Jesus much... View Obituary & Service Information

The family of Herbert Leighton Hale created this Life Tributes page to make it easy to share your memories.

Send flowers to the Hale family.