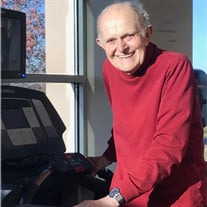 Heinz Paul Rudolf, 94, of Columbia, IL, born September 16, 1926, in Schmiedeberg, Germany, passed away on April 17, 2021, in O'Fallon, IL. Heinz grew up and attended elementary and middle school in Schmiedeberg, followed by the Obershule for Boys. Heinz attended Medical School at the University of Marburg in Germany. During the war, he worked in salt and coal mines and afterwards on a dairy farm to help pay for medical school. He came to the United States under a Student Exchange Visitor Program in 1955. He then fulfilled a mixed internship at Lutheran Hospital in St. Louis, MO. Heinz was a resident physician at Shore Memorial Hospital in Somers Point, NJ, followed by a residency as a Resident Physician and Surgeon at Wabash Employees Hospital in Decatur, IL, from 1956 to 1958. Heinz later was associated with Centreville Township Hospital in Centreville, IL, (1958-1979) as well as St. Mary’s Hospital in East St. Louis, IL, (1959-1961) while maintaining his private medical practice in Cahokia and East St. Louis. Heinz became a United States Citizen in 1962. He was an active staff member of St. Elizabeth’s Hospital in Belleville, IL, and Belleville Memorial Hospital. He was an active member of the AMA and received many Physician’s Recognition Awards throughout his 45-year medical career. He retired in April 1999 at the age of 72. He loved to learn and maintained his medical license taking continuing education credits until the age of 82, ten years after he retired. He retired in April 1999 with one of the largest and few remaining solo general medicine practices in Southern Illinois. Heinz married the love of his life, Christina Maria Gertrude Susanna Kleff, on his birthday, September 16, 1956, in Germany. He enjoyed going to the YMCA and walking miles on the treadmill, playing his accordion for family and friends, swimming, and snow-skiing with his family. He especially enjoyed spending cherished time with his family. He and Christina taught all the children how to ski during memorable Colorado ski vacations. This passion lives on today in their grandchildren. Not to be overlooked, but Heinz enjoyed the occasional sip of Jagermeister. Heinz and Christina were active parishioners of Blessed Sacrament Catholic Church in Belleville, IL, when their five children grew up. Heinz and Christina are current members of Immaculate Conception Catholic Church in Columbia, IL. He was preceded in death by his parents, Paul Rudolf and Martha (Zinnecker) Rudolf, and grandson Nathaniel Lucarelli. Surviving are his wife of nearly 64 years, Christina (Kleff), his children, Soraya (Timothy) Massey, Iris Rudolf, Heidi (Mark) Lucarelli, Cordelia (Norman) Smith, Heinz (Sally) Rudolf, and 11 grandchildren: Timothy (Michelle) and Daniel Massey, Katie, Rebecca, and Benjamin Lucarelli, Joshua, Jonathan and Jordan Smith, Hannah (Colin) Chandler, and Gretchen and Anna Rudolf. He is also survived by one sister, Edeltraut (Lorenz) Sommer, and brother-in-law, Ralph (Wendy) Kleff. Heinz was a devoted husband, terrific father and grandfather, and an excellent family physician. It has brought much joy to his wife and children to have heard from so many former patients of Heinz since his retirement in 1999, many of whom he delivered into this world along with delivering their parents. His patients loved and appreciated him, and he truly cherished his God-given abilities to keep them healthy. A private burial will take place at Immaculate Conception Cemetery in Columbia, IL, with Msgr. Carl Scherrer, officiating. In lieu of customary remembrances, the family requests with gratitude that memorial contributions be directed to: Eugene Schorb - Immaculate Conception School Education Fund, 411 Palmer Road, Columbia, IL, 62236 and Blessed Sacrament Catholic School, 8809 W. Main St., Belleville, IL 62223. For more information, please visit our website, www.leesmanfuneralhome.com. Leesman Funeral Home, Columbia, IL, is entrusted with arrangements.

Heinz Paul Rudolf, 94, of Columbia, IL, born September 16, 1926, in Schmiedeberg, Germany, passed away on April 17, 2021, in O'Fallon, IL. Heinz grew up and attended elementary and middle school in Schmiedeberg, followed by the Obershule for... View Obituary & Service Information

The family of Heinz P. Rudolf M.D. created this Life Tributes page to make it easy to share your memories.

Send flowers to the Rudolf family.