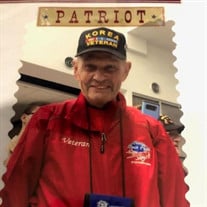 Baldwin- Harry P. Wetzel, 87, of Baldwin, passed away on Tuesday, December 29, 2020 at his home in Baldwin. He was born March 19, 1933, in Red Bud to John and Frieda (Mehring) Wetzel. He married Eileen Deichmann on August 12, 1955 at St. John's Lutheran Church in Baldwin. She preceded him in death on January 16, 2005. Harry was a proud veteran of the United States Army. During the Korean Conflict he chauffered Generals and other high ranking officials to different bases. Once honorably discharged, he returned home and began farming cattle and growing beans and corn. In addition to farming, he worked as a maintenance supervisor at Singer Furnace Factory and then later retired from Weigmann's in Freeburg. He was a longtime member of St. John's Lutheran Church in Baldwin. When he wasn't working, Harry enjoyed spending time outdoors, hunting for deer, waterfowl or whatever was in season and fishing with his buddies. He liked to golf and work in his shop crafting and woodworking. He was an adventurous man who most loved spending time with his family and grandkids and recently went zip lining in his 80's. He will be dearly missed. Surviving are three daughters, Vikki McKay, Cheryl Wetzel and fiance Mike Armocida and Darla (Vance) Porter; five granddaughters, Brandi (Darrell) Thomas, Sara McKay, Gemma (Jason) Fiduk, Shannon Peebles and Erin (Chris) Lybarger; four grandsons, Bryant Porter, Jake Peebles, Sean Peebles and Derek McKay; five great-grandchildren, Nikkos Wright, Lilah Wright, Navi Wright, Justice Thomas, and Braxten McKay; brother-in-law, Edward Deichmann and sister in law- Jean Wetzel; and many other relatives and friends. He was preceded in death by his parents, wife, five brothers, Elmer Wetzel, Henry Wetzel, Orville Wetzel, Ralph Wetzel and John Wetzel and one sister, Bernice Rice. A private funeral service will be held at St. John's Lutheran Church in Baldwin. Rev. Clifford Adair will officiate. Burial will follow at St. John's Lutheran Cemetery in Baldwin with military rites provided by the Illinois National Guard. Due to current Covid 19 mitigation face masks will be required and social distancing will be enforced. Visitation will be from 5:00 PM until 7:00 PM, Friday, January 1, 2021 at Leesman Funeral Home in Red Bud. Memorial donations are suggested to Disabled American Veterans and St Johns Lutheran Church in Baldwin. Donations will be accepted at the funeral home and church. For more information, please access our website, http://www.leesmanfuneralhome.com. Arrangements were handled by Leesman Funeral Home in Red Bud

The family of Harry P. Wetzel created this Life Tributes page to make it easy to share your memories.

Send flowers to the Wetzel family.