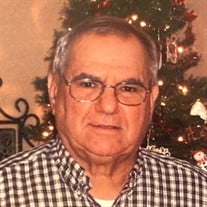 Harold Dean Harvell died in his Dupo home right next to his favorite chair on Saturday, February 20, 2021. Dean was born in Cairo, IL on August 22, 1943. He lived “down home” in Diswood, IL until the summer of 1945 when his parents, Wesley and Helen, moved to East Carondelet, IL so Wesley could work on the railroad. Dean spent his childhood making mischief with his sister, Delores, and brother, Don, in East Carondelet and attended Dupo High School, graduating in 1962. After high school he began working at McDonnell Douglas where he proudly built F-15 fighter jets. Dean married his wife of 52 years, Susan, on November 30, 1968. Dean and Susan made their home in Dupo where they raised their two children, Brian and Mandy. His children have lots of memories of their dad while riding in the backseat on family vacations out West and many, many trips to Florida. Dean spent countless weekends “out the farm” fishing, riding four wheelers, “fixing fence”, drinking beer, butchering, and simply making memories with family and friends. He attended Christ United Church of Christ in Dupo. Dean continued working at McDonnell Douglas(Boeing) until his retirement in 2000. After both Dean and Susan retired they enjoyed traveling to Florida to see his family as well as traveling and spending time with friends. The last 16 years of Dean's life brought him so much joy through the lights of his life, his granddaughters, Abby, Grace, and Madelyn. He spent many hours driving the girls back and forth from their home to Dupo and cherished every moment. Dean most enjoyed watching them play softball no matter how far away or early the games were. In his last days, all he wanted was to spend time with his granddaughters and tell them how much he loved them, which he was able to do. Dean cherished his family and friends and they will miss him greatly. Dean is survived by his wife, Susan, nee Smith, of Dupo, IL, his son Brian Harvell and wife, Kerri, granddaughters, Abby, Grace, and Madelyn all of Imperial, MO, and his daughter, Mandy Harvell, of Dupo, IL. He is also survived by his sister, Delores Harvell-Pierce, of Tucson, AZ, and brother, Don (Larametta)Harvell of Milton, FL, brothers- and sisters-in-law, Micheal(Eva) Smith, Jerre(Larry) Goley, Scott Smith, JoAnn Smith, niece and nephews, Gary Adkins, Chris Adkins, Wesley Harvell, Rick(Yolanda) Harvell, Louis(Bridget) Smith, Wade (Shanna) Smith, Cara McVey, Scooter Goley, and many cousins and friends. He is preceded in death by his parents, Wesley and Martha Helen Harvell, nee Vincent, nephew, Steve Adkins, and brother-in-law, Don Pierce. Visitation will be on Thursday, February 25, 2021 from 4:00 to 7:00 p.m. at Leesman Funeral Home in Dupo, IL. Services will be held on Friday, February 26, 2021 at 10:00 a.m. at Christ United Church of Christ in Dupo, IL., with Rev. Todd Muschaney, officiating. Interment will follow in the Valhalla Gardens Of Memory, Belleville, IL. In lieu of customary remembrances, the family requests with gratitude that memorial contributions be directed to Christ United Church of Christ 200 So. 3rd St., Dupo, IL, 62239. For more information, please access our website, www.leesmanfuneralhome.com. Arrangements were handled by Leesman Funeral Home.

The family of Harold Dean Harvell created this Life Tributes page to make it easy to share your memories.

Harold Dean Harvell died in his Dupo home right next to his favorite...

Send flowers to the Harvell family.