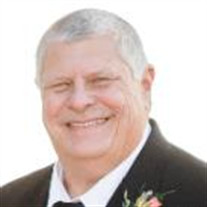 Prairie du Rocher- Glenn S. Phegley, 63, of Prairie du Rocher, passed away at 6:04 PM, Sunday, March 28, 2021 at his home. Glenn was born on March 22, 1958 in Red Bud to Dale O. and Dolores (Bachelier) Phegley. He married Gina M. Shinabargar on November 7, 1981 in St. Joseph Catholic Church in Prairie du Rocher. Together they raised four wonderful children in the home he was born and raised. He graduated from the University of Missouri-Rolla with a degree in electrical engineering. He worked 37 ½ years for Anheuser- Busch prior to his retirement in 2019. Once “retired” he was re-hired by AB to work as a contractor. He was catholic and a member of St. Joseph Catholic Church in Prairie du Rocher. He served as a reader at mass and was previously on the Parish Board. He was a personable man who never met a stranger. He was active civically and formerly served on the Prairie du Rocher School Board and Village of Prairie du Rocher Town Board. He was currently the President of the Commons Board. He was also a member of the Modoc Sportsman Club. He liked speaking publicly and rarely spoke under 20 minutes. He was a hardworking family man who enjoyed spending his free time with his children and grandchildren outdoors or reading science fiction novels. He enjoyed listening to classic rock on KSHE radio, jeep runs, NASCAR but mostly enjoyed Red Bud Musket Football. He currently held the position of equipment manager but was the head coach and assistant coach for many years. In addition to Musket football, he coached and ran the Khoury baseball league in Prairie du Rocher for many years and he coached basketball at Prairie du Rocher Grade School for 7 years. Surviving are his wife- Gina M. Phegley of Prairie du Rocher, daughters- Sara Simpson and husband Rhett of rural Evansville and Jaimee Phegley and fiancé Will Henderson of Swansea, sons- Andrew Phegley and wife Rabecca and Alexander Phegley and wife Natalie both of Columbia, four grandchildren- Lainey and Everett Simpson and Quinn and Jade Phegley, two step grandchildren- Keenan Powell and Taylor Elgin, brother- Steve Phegley of Peoria, AZ, sisters- Kay Dearworth and husband Bill of Troy and Patti Smith and husband Mark of O’Fallon, IL. Also surviving are numerous nieces and nephews and great nieces and nephews as well as several brothers and sisters in law. He was preceded in death by his parents. A memorial visitation will be held from 2-6 PM Monday, April 5, 2021 at Leesman Funeral Home in Red Bud. A private catholic memorial service will immediately follow at the funeral home. Fr. Clyde Grogan will officiate. A memorial service at Musket Field will be held at a later date. Memorial arrangements were entrusted to Leesman Funeral Home in Red Bud. Memorial donations are suggested to the Red Bud Musket Athletic Association and will be accepted at the funeral home. For more information, please visit www.leesmanfuneralhome.com

The family of Glenn S. Phegley created this Life Tributes page to make it easy to share your memories.

Send flowers to the Phegley family.