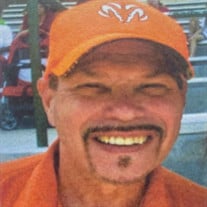 Gary Otremba, 70 of Belleville, IL, passed away in his home after a lengthy battle with heart disease. He was born on March 14, 1951, in Chicago, IL. Gary was an extraordinary man beyond limitations. He had unimaginable skills that he used to achieve a great many accomplishments. Gary excelled as a Cub Scout and moved on to attain Eagle Scout honors. At the age of 12, he owned his own lawn business until he gave it up to pursue music business. At 14, Gary started and managed a band, The Hudson Bay Company, performing from 1961-1969. Visit stlmusicyesterday.com for pictures and memories of the band. He put on music events in the Greater Belleville, IL area, featuring his band and others, also while becoming a published and copy written artist. He joined the NRA in 1961. He was proud to serve his county. A decorated U.S. Army Veteran, serving with distinction and pride from 1971-1977. Gary lived life to the fullest. In 1989, he met Don G. Lindley, who shortly after was diagnosed with Agent Orange cancer. Gary started the foundation Don G. Lindley Memorial Foundation, in his honor. At first this was to raise money to assist Don while he battled cancer until his death in 1989, then to donate to other veterans of similar situations. He held an annual event and created an unforgettable motorcycle and car motorcade, which eventually led over 1,000 riders in a motorcade reaching 11.5 miles in length. People came from as many as 13 different states to participate. Some as far as Nevada and New York. Due to his and his volunteer’s health issues, Gary had to limit himself with the memorial in 1998. Gary managed several businesses. Including clothing and jewelry, brokering in diamonds from 1979-1983. He owned “Talkn’ Graphics” from 2003-2012, during which he invented and patented “Talkn Tires”, a custom lettering system for motorcycles and ATVs. Gary ran several staffing agencies as well. All Gary ever wanted to do with his life was make a positive difference. Surviving is his fiancé, Christina Craft; son, Justin Thomas Curry Carothers; daughters, Nicole Renee Martin, Heather Lynn (Doug) Martin, Danielle Kalean (Joe) Martin, Jessica Ann Craft, Daphna Mary (CJ) Pratt; and his beloved cat, Smokey. Gary was preceded in death by his parents, Robert L. and Irene F, nee Baumann, Otremba; and a son, Jason T. Otremba. Per his wishes, Gary will be cremated and an interment with military honors will be held at Jefferson Barracks National Cemetery, St. Louis, MO at a later date. For more information, please access our website, www.leesmanfuneralhome.com. Arrangements were handled by Leesman Funeral Home.

Gary Otremba, 70 of Belleville, IL, passed away in his home after a lengthy battle with heart disease. He was born on March 14, 1951, in Chicago, IL. Gary was an extraordinary man beyond limitations. He had unimaginable skills that he used... View Obituary & Service Information

The family of Gary Otremba created this Life Tributes page to make it easy to share your memories.

Gary Otremba, 70 of Belleville, IL, passed away in his home after...

Send flowers to the Otremba family.