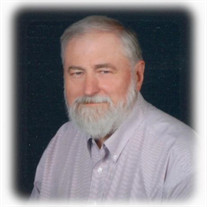 Forrest Dee (Nick) Nixon III of Columbia, IL died on December 25, 2020, from complications of Covid. Born November 15, 1946 in Colorado Springs, CO, he was the eldest of four children of Forrest Dee Nixon Jr and Cornelia Elizabeth (Bradford) Nixon. He grew up in Pensacola, FL. Nick was a talented engineer, a skilled manager, a dedicated gardener, a budding artist and an outgoing, cheerful friend to all around him. This continued despite the sudden death on April 1, 2020 of his beloved wife of 51 years, Pamela Cook Nixon - and the loss of his son Bradford Jonathan Nixon, an Iraq war veteran and parent of his grandchildren, in 2018 to heart failure. He is survived by his treasured daughter Christina Joanna Nixon of St. Louis. Nick held a BS from Ohio State University, where he met his wife Pam, and an MS degree from Purdue University. While in Lafayette, IN Nick and Pam adopted their infant children. From there they lived in Decatur, AL and Keithsville, LA before moving in 2005 to Columbia. His career as a non-ferrous metallurgist began at Alcoa right after college. Later he was production manager for Lennox International copper tube. Cerro’s purchase of a Lennox division brought Nick to St. Louis, where he was part of Research and Development, creating new patented products and overseeing quality control of multiple plants. Plants in his garden were just as important to Nick. In every season he created lovely, welcoming spaces around their house. And at Christmastime his artistic, original decorations delighted his neighbors and friends. Others remember his favorite phrase “Go Auburn!” Forrest (as he was known outside the family) was a pillar of his church community, St Paul’s United Church of Christ in Oakville. He had been serving as Treasurer for five years, was head of the Mission Committee and sang in the choir. He also was deeply involved in St. Paul's Tree House Early Learning Center and active on the Board of Feed My People. In addition to his daughter Christina, Nick is survived his sisters Carol Hardiman and spouse Larry of Odessa, TX, and Susan Braden of Dallas. His brother Michael is deceased. Nick will be sorely missed by his granddaughters Libby Christina (with great grandson Jaymen), Kelly (with great granddaughter Karma) and McKenzie in North Carolina; and Rianna, Adalyn and Mavis in California. Other survivors include his brothers and sisters in law: Susan Cook Polgar and Leslie, Lafayette, CA; John Jimerson Cook and Pamela, Cleveland, OH; William K. Cook and Grace, Mill Creek, WA. He is also mourned by several nephews and nieces who knew and loved him. A memorial service celebrating his life will be held at his church, St. Paul’s United Church of Christ Oakville at a future date when we can all safely meet and embrace. In lieu of flowers, the family requests with gratitude that memorial contributions be sent to St. Paul’s UCC Oakville or the charity of your choice. Lawlor Funeral Home, Columbia, IL, handled arrangements.

The family of Forrest D. Nixon III created this Life Tributes page to make it easy to share your memories.

Send flowers to the Nixon family.