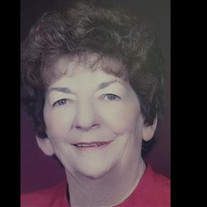 Fay L. Kueker (nee Melliere), Prairie du Rocher, IL., born July 20, 1935, in Prairie du Rocher., passed away peacefully at home, surrounded by her family on Wednesday, April 27, 2022. She is survived by her beloved husband of 66 years, Delbert, whom she married on March 10, 1956 at St. Peter E&R Church in Red Bud, IL. Surviving also are her 4 girls, Deborah Lewis of Modoc, IL, Cathleen (Stephen) Uffelmann of Red Bud, IL, Sharon (Kenneth) Johnson of Waterloo, IL and Lisa (Duane) Willeford of Modoc, IL.; 10 grandchildren, Stephanie Kennedy, Derek (Katelin) Uffelmann, Brandon(Kristin) Sachtleben, Nicholas (Amy)Uffelmann, Kirk Uffelmann, Blake Uffelmann, Brock Johnson, Alex Willeford, Brett Johnson and Kayla(Dillon) Kirland; 11 great-grandchildren, Luke and Jack Kennedy, Elaina, Case and Sophia Uffelmann, Jack, Henry, Claire and Rose Sachtleben, Oliver and Georgia Kirland. Also surviving are a sister, Joy (Robert) Stafford of Florissant, MO, brothers Gerald Melliere of Prairie du Rocher, IL and Ronald (Jeanette) Melliere of Modoc, IL. She was preceded in death by her parents Xavier and Christine(nee Hoffmann) Melliere, son-in-law David Lewis, sister-in-law Judith Melliere, brother-in-law Louis Biernbaum, and father and mother-in-law Edward and Freida (nee Schlemmer) Kueker. Fay grew up on the family farm on the edge of town in Prairie du Rocher where her Dad was a lifelong farmer in grain, livestock and hay; as well as having the Prairie du Rocher U.S. Government airport/emergency landing field from 1932-1952. Because of their farm’s connection to town, she often commented that she grew up having the best of both worlds: the fun of living on a farm yet having the school/schoolyard and classmates as their next-door neighbors. After high school she moved to St. Louis with girlfriends and enjoyed working at the St. Louis Chamber of Commerce, having fun in the city and dancing at the Casa Loma Ballroom. But after marriage and the birth of their first child, she chose to return to her hometown because she wanted family to be raised near family. As her family grew she enjoyed being a stay-at-home Mom. She loved being with her girls more than anything else and the feeling was mutual. As her girls grew older, she did occasional work outside the home as a secretary at The Mill Grain Elevator in Prairie du Rocher(now GatewayFS), store clerk, Census taker and for many years was involved at the polls on Election Day. Over the years enjoyed dancing , music, Saturdays at yardsales or on the Boat, being a volunteer usher at the Fabulous Fox Theatre in St. Louis, and summer vacations spent roadtripping across much of the country in their white Conversion Van packed with as many kids and grandkids that wanted to come long for memories to be made and laughter to be had. In all things, her family was by her side. She always made time for her kids and later was babysitting grandkids and great grandkids. They all knew they were her priority and greatest joy to whom her life was devoted. Our Mom was a fun-loving, smart, strong, self-less, independent Mom. She was the perfect example to her girls of what a mother should be. She made sure faith was center to our lives by getting us to Sunday School/church every Sunday. She made our house a home where all knew they were welcome. She taught us to put your children first, the importance to be able to laugh in all circumstances, to enjoy life, to work hard, to never give up, to be a good person and just be yourself. Thanks Mom, for helping make us who we are. We will miss you terribly but will remember you daily for the love and laughter you shared and for a life well-lived. Funeral Services to be held at Leesman Funeral Home in Red Bud on Saturday, April 30th at 10:30am with Pastor Duane Willeford officiating. Burial following at St. Joseph Cemetery in Prairie du Rocher with meal immediately following at the American Legion Hall in Prairie du Rocher. www.leesmanfuneralhome.com. Leesman Funeral Home, Red Bud, IL, handled arrangements.

The family of Fay L. Kueker created this Life Tributes page to make it easy to share your memories.

Send flowers to the Kueker family.