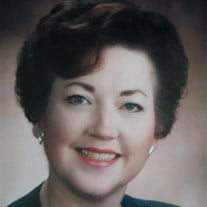 F. Ann Frank (May 9, 1944 - December 23, 2019) Frances Ann Frank, 75, passed away Monday, December 23 at Mercy Hospital South in St. Louis, Missouri. Visitation will be held at the Church of Our Lady of the Snows, 442 S. DeMazenod Drive, Belleville, Illinois, on Saturday, January 4, 2020 from 10:30-11:30 a.m., with Funeral Mass at 11:30 a.m. Ann Frank was born May 9, 1944 to Frances Jean Green and William C. Green of Wisconsin. She married Joseph G. Frank on December 12, 1967. Ann Frank was a member of St Joseph’s Cathedral in Jefferson City, Missouri since 1977, a member of theRed Hat Ladies, Ashland Missouri chapter, and Ashland Senior Center bridge club for many years. She was also a member of the Republican Women’s Club and Pachyderm Club of Columbia, MO. She attended St Theresa’s Academy in St Louis and graduated in 1962. She worked as a teller at Mallinckrodt Credit Union in St Louis after graduation until 1965. Ann was an office manager at Midwest Medical Laboratory from 1965-1967 and in 1968 became a bid interpreter for Scientific Products in St Louis. She began working with her husband Joseph at his software engineering company, Software Systems Incorporated (SSI) in 1980 as an administrative assistant. In the spring of 1988, Joseph Frank left SSI to found Synapse Communications and made Ann his Administrative Assistant and a member of the board of directors. Ann Frank loved giving her time and monetary donations to those causes she believed in. She donated to the Association of Firefighters and Paramedics, St Jude’s Children’s Hospitals, the Salvation Army, Missionary Oblates of Mary Immaculate, Coyote Hill Christian Children’s Home and the Guiding Eyes for the Blind. She especially loved animals and continuously donated to the World Wildlife Fund, the St Louis Zoo Friends, and the Humane Society. In 1981, the Save the Manatee club was formed and Ann donated generously to them at their founding. Survivors include two daughters: Kimberly Ann Genova, Columbia MO and Heather Jean Miller, Dupo, IL; one sister, Elizabeth Hagan, Barnhart, MO; two brothers Bernard James Green, Collinsville, IL and Thomas Christopher Green, Venice, FL; and 2 grandchildren, McCulloch Ann Miller and Ava Alana Miller of Dupo, IL.

The family of F. Ann Frank created this Life Tributes page to make it easy to share your memories.

Send flowers to the Frank family.